By far one of my most favourite ‘mini’ project we had so far. Unlike other projects, this one was all about arranging and organising information, which is something I enjoy doing and hoping to do more in the foreseeable future. At the beginning of this task, I received a list of movies and information that needed to be embedded stylistically. Having first looked at the sheet it was quite clear that there was a lot of minor ‘flaws’ that made the text difficult to read and comprehend. Ranging from various time and date formats to misused hyphens.
Due to the limited time given to complete this task, I had to work under pressure; however, having seen existing movie flyers and work of other students, I had an idea of what I wanted my outcome to look like.
My aim for this project was to create something simple, clean and organised. This gave me an idea to embed the key information (according to my judgement) in small boxes, staring from time to the age rating and any other extra information. While designing the boxes, I also wanted to highlight the language and whether the movie had audio description/subtitles. The reasoning behind my decision was that I thought these features affect the movie directly.
In terms of the hierarchy, It was important to me to tailor it to the needs of most adults. As a lot of us live a busy life or work, it was important to me to make sure that the time, date and place are clear and obvious, as it would be pointless for someone to read all the information about the movie, if they can’t attend it. 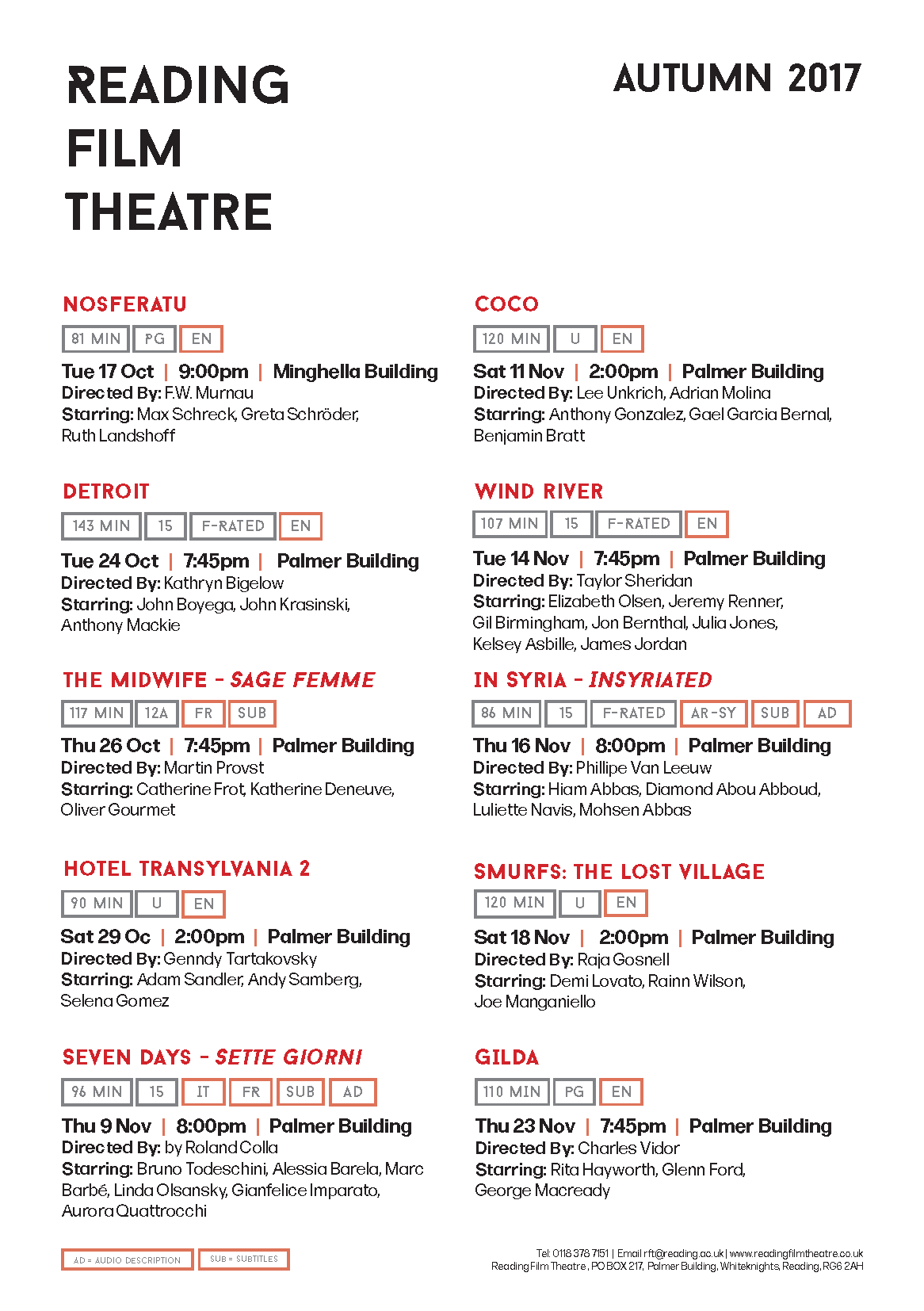 Although the feedback I received was mostly positive, I introduced some changes in terms of space: 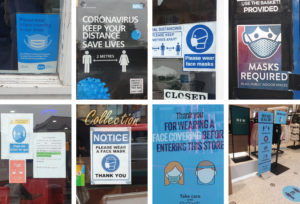 Sue and Emma’s project was all about gathering real-life examples of COVID images around us. Since it’s been months since the first Corona outbreak, it’s fair to say that we all got used to the repetitive posters and announcements that routinely remind us about the laws put in place to stop the spread of coronavirus in the UK. Having said this, a lot of us stopped paying attention to the posters themselves. I highly valued this experience as it’s not often that I look or analyse real-life examples of information design. It has taught me a lot about features found in Covid imagery, from the choice of colour to the specific fonts and typefaces.
As expected all of the imagery I collected using a sans-serif typeface. Most likely, this is a result of sans-serif fonts are often considered as cleaner and more serious, while also easier to read from up close or distance. A lot of the posters and images I have found had a centre alignment and used a very limited number of colours (2-4 at most). ‘Keeping it simple’ is the key fact in information design as you want everyone to understand the information you’re presenting. A lot

of the posters were also accompanied by icons and vector images that illustrated what was stated on the posters.
Notably, I have noticed that most of these posters came in 3 colours, blue, red and yellow. Blue is quite commonly used in information design as it is a neutral cool colour. While I agree that the posters in blue were effective, I feel like they are more of a guide rather than enforcement of the law. On the other hand, the yellow posters were combined with a highly contrasting colour such as Yellow (in the examples presented on this page). Unlike the blue posters, yellow draw much more attention, as the combination is known in nature for indicating caution.

During the 2nd week of mini-projects I was honoured to meet Eric Kindel who presented me with the brief, that, unlike many others, involved going out and exploring real-life examples of eye-catching type around us. These could have been photographs of logos, singular letters/numbers, 3D type etc. Quite luckily that day the weather was quite good, hence providing us with good lighting and subtle shadows that accentuated any raised type. 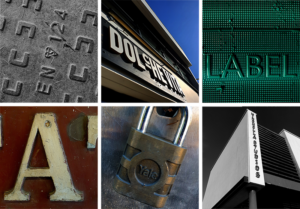 While outside I focused on finding hidden type, one that wasn’t visible straight away, or its features weren’t as obvious from the distance, as opposed to up close. I also tried photographing these examples of type from different angles, especially if it was raised, to see whether that affected how we see it. After we have taken the photos in the given amount of time, we were asked to produce visual collages based on the common similarities between the typography we have taken photographs of. 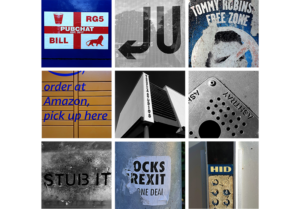 Beforehand, I edited any images I wished to use in this mini project via Adobe Photoshop, which allowed me to emphasise some of the features, and make sure that all images within the collage look visually similar to one another. In some cases, I have also straightened up the photographs, making sure that they have some logical perspective, and are overall pleasing to look at.

Working outdoors really reminded me of what it means to be a graphic designer. Having spent a year in London last year, I learnt that working from home is a challenge, as the best and easiest source of inspiration is the world that surrounds us. During this activity, I also consolidated my skills as a Typographer, as it taught me to explore and type that I haven’t paid much attention to in the past. 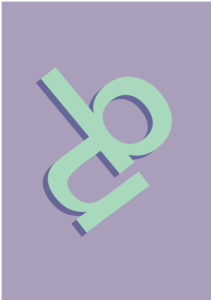 Today’s session was hosted by Berta Ferrer, who talked to us about books: What they are, what makes a book a book. We have also looked at examples by other artists and designers, who took an alternative approach in creating books. From cutting up pages to rearranging the words to create a novel, I have learnt that a book doesn’t necessarily need to look like a monotonous novel. A book is just an object, and the text within it is its content; therefore, books don’t need a narrative in order to be considered a book. Artists such as Keith Smith, whose work we looked at, replaces content with other objects (thread) to alter one’s experience with the book.
Consequently, we were asked to create our own book, using a book we already have. Since I haven’t found a book I could use, I chose to work with one of the magazines I own and alter it in that way. The title of my book was a loop, and it tells us a story of a man who gets pulled into a book, and re-lives the same memory over and over. Since the book mentioned a female character I decided to work with that instead, as I was intrigued by this mysterious character in the story.
Unlike the works of others, mine differed a lot due to my limited resources available. Working with a magazine proved to be a lot more difficult, as the pages were thin and full of images rather than text. The pages were also thinner which made them a lot more difficult to manipulate them to form different shapes. On the other hand, I quite enjoyed the activity, despite the ‘manual’ aspect of it. As a designer I find myself working more comfortably digitally, so working hands-on was a bit of a challenge. Having said this, however, I really enjoyed working with different media and creating collages, that I would have never thought of making. 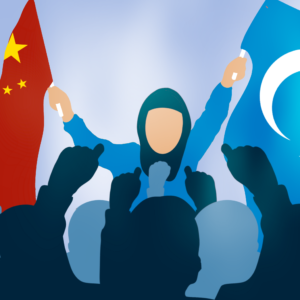 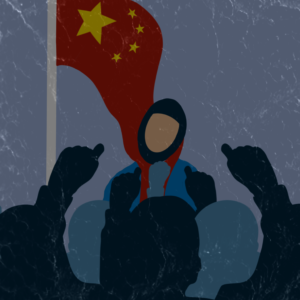