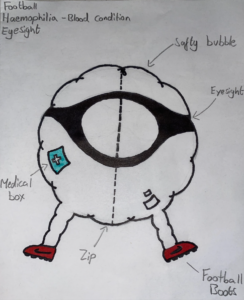 My partner Lewis loves playing football, however he has a condition called Haemophilia which can be described as a bleeding disorder where the blood in the body lacks the necessary amount of clotting factors preform proper clotting. As this could lead to issues during injury, I have designed a safety bubble with built in football boots and medical equipment in order for Lewis to stay as safe as possible when partaking in football. I have also added a magnifying like lens in the front of the bubble in order for Lewis to see easier as he also needs glasses/contact lenses to see. I decided on this feature as it could be dangerous to play with glasses and contact lenses as they could cause injury in wake of a fall. And finally I have added a zip at the rear of the bubble to exit when needed.