For my ‘Lettering in the Environment’ project, I decided to photograph the themes of raised and indented typography around campus. I chose this theme as walking through campus I realised how common place such techniques are in many areas such as construction, maintenance and even signage. That became apparent to me firstly from the many maintenance and manhole covers that where present an the pavement and the roads, which I believe were raised cast metal in order for the preservation of the type to be present for longer than a print based design. This technique can also be seen in building signs as the text is raised from the buildings wall however, unlike the sturdy maintenance based items, I believe this was designed with the attention of the reader in mind other than rigidity. 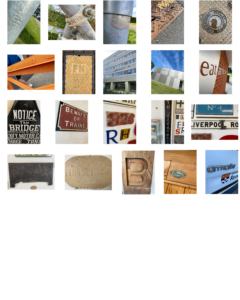