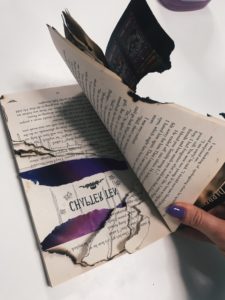 I chose at first to pick noise when experiment with our broken narratives project. I start first by tearing pages, cutting up words, doodling inside the book, to try and make it look chaotic, however, I was not satisfied with the results, and thought it didn’t look half chaotic enough, or exemplified a noisy book, or a noisy writer, where the story was almost trying to escape the book.

After some experimentation, I decided with a bit of help from my flatmates, to try and burn a hole through the book, starts with ripping out the centre of the first few pages and the cover, and as the front of the book is also covered in plastic this created a bubbling texture over the front. The book itself was a fantasy book about vampire hunter, which is what sparked the inspiration for setting the book on fire(as vampires, as we all know, burn in the sun). The colourful sheen of the front was magnified after the burning process, and made it look a lot more mystical in my opinion and created layering in the pages due to where the burning took, creating a very charred edge to it as well. I also included a picture of the process, where you can much more clearly see the hole now in the middle of the book while it’s still on fire.

(I also kept jug of water nearby for when necessary during this project).