For this project, search for lettering around the campus based on a theme of your choosing and take photos of it. The theme can be whatever you like – or find, such as style, function, material, colour, texture, technique, and so on. Look everywhere – up, down, straight ahead; on buildings, objects (including cars), and bits of infrastructure (like lamp posts or utility covers). When you’re photographing, get up-close as well as shoot from distance.

After the introduction to the project from Eric, we were left to take photographs for the remaining hour. As I wandered around the department to look for anything that stuck out to use as a theme, I stopped and thought to myself- ‘what if i did the exact opposite?’. So I decided to look for things that didn’t stick out, small examples of lettering that were passed by on a daily basis without anyone looking at them. I found engravings in the handrails outside of the department, university logos printed on the smallest of stickers and even a logo etched into the head of a nail.

I decided to sort my photos into three sections: engraved, printed and raised. 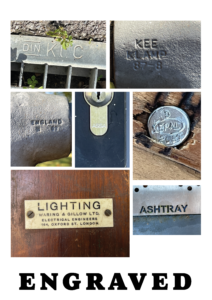 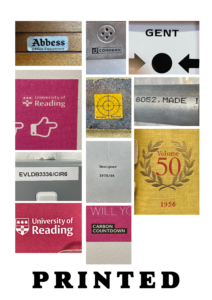 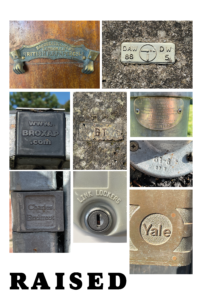 I decided to do this to highlight the differences in materials, textures and creation methods behind each of my photos. For example, a majority of the raised and engraved letters are made from stone or metal, whereas the printed ones were on paper, plastic and canvas type materials. Making these connections made me think more deeply about the manufacturing process of these letters, and the different methods used, for example, after watching lectures from our Printing & Printmaking module, I considered whether metal casting similar to the process of making sorts was used for any of the small metal objects, such as the nail head. 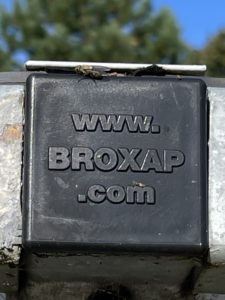 It also made me realise, that while these small letters may not have any kind of significance to a majority of people, they still have uses to others. For example this small website at the very top of a bike rack- no one would ever bother to stop and read it, but if it were to break, the person repairing it would need that website to figure out who made it, and how to fix it.

I really enjoyed doing this project as it was much more active and let us think for ourselves about a theme that we could apply to what we were looking for, essentially letting us each create our own unique brief as a development of the original. Doing this project also let me learn how lettering interacts with the environment, and that sometimes type is needed in even the smallest of things, as it can still communicate and has a purpose- not one noticed by many, but essential to some.