My chosen piece from the collections today was this circus poster. I was drawn to this poster because its helpful…but also not. It only gives generic information such as what they have to offer at the circus, but not specifics such as times and location. Therefore, making the poster unhelpful for public planning to attend. However, in the image below it shows a blank space below the title. I think this is where the timings and dates would have been placed but due to a circus constantly being on the move, it’s cheaper and easier to leave the space blank until needed. Another noticeable point in this poster is the size and shape of it. The image above shows the poster is a vertical rectangle. This type of shape would have been used firstly to reduce cost, but also for space on walls or lamppost to advertise. As the bigger the poster, the more likely it was to be cover by something else, therefore creating a poster this size helps to reduce those chances. 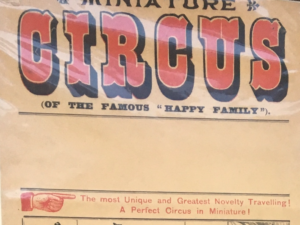 Further on to the poster being cheaply made, a lot of the print hasn’t managed to transfer properly. The image below shows an  inconsistency in the blank print around the red letters. For example, on the letter T in tiger, there is a consistent black boarder around the letter. However, with the rest of the word there is a lack of black outline around the letter, compared to the word above, ‘Norna’. I think much of this is due to the poster being cheaply and quickly made. Hundreds of these would have been printed and they were only needed for a short amount of advertising time, so a small inconsistency in the print wouldn’t have meant much.

Due to the poster having no date or location, it makes it difficult to date the poster black to a specific time. The colours used are red and black, which were the favoured colours used in typography during the modernism movement, which helps to date it back to 1930s. Further to this, the image below shows that the circus was mainly made up of animal acts, which are now banned in the UK due to animal welfare. These types of acts were more popular and allowed around the 1930s, helping to date the poster back to the early to mid 20th century.