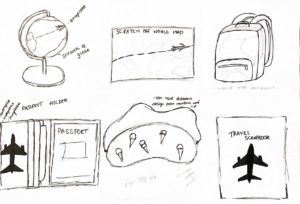 For Kim’s Project on Thursday we got into groups and learnt some interesting/unusual facts about each other. I learnt that my partner loved to travel. I decided to brainstorm and research ideal gifts that would be perfect for a frequent traveller to have and utilise. As seen in my sketches, I played around with mostly items you can take with you as you travel such as a backpack, a scrapbook, a sleep mask and more. I then looked at incorporating the second task into my designs which was to find a word from the random word list and see how I can add it into my designs. My first word was aeroplane and I experimented with how it would look and how I could make it fit in. I decided that the best design was the passport holder as I felt I could incorporate a lot into it and it was the best ideal gift out of the ones I had thought about.

Sketching out my passport holder, I decided to draw a simple icon of an airplane which is of course fitting the theme. I decided to look at the second and third random words in which being compass and money. I included the navigations of the compass; north, east, south and west around the airplane in an order to visually mimic the layout of a compass. I then decided I could include the random word money by also illustrating things that can go in the holder along with the passport, which was bank cards and loyalty cards. I also added pound signs to further accentuate the use of the word money. 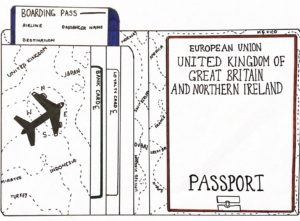