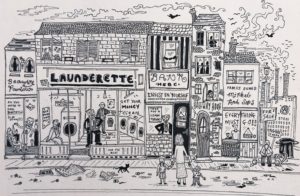 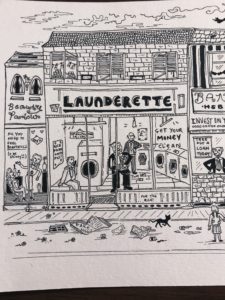 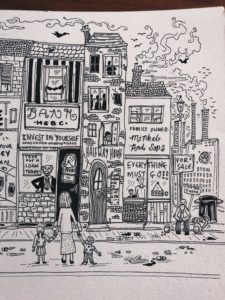 My word to focus on was Money. My design made up one piece in total, but had two very contrasting sides to it. One where those with lots of money are happy and busy being greedy. I drew inside the laundrette Donald Trump, Jeff Bezos, cleaning their money, a play on the term money laundering. Also it has a beauty parlour on the very left, containing only beautiful, slim women, that promise ‘beauty’.

On the other side we start to see HSBC bank in the middle, a bank known for some very corrupt deals, including money laundering in Mexico, taking money from drug lords who were destroying the community and many families lives. (As seen the programme ‘Dirty Money’, I also make a reference to the Volkswagen on the far right with their factories polluting the air and sky above, followed by hundreds of black crows, a symbol of death or tragedy).

The centre of my piece shows a single mother and her children, standing outside a bank ready to take out a loan. Banks often pay out loans, that people will never be able to pay back, and are set back for years by interest that they can’t afford, all of which keeps rolling the ball of capitalism. Putting people like the mum and her children, in a very vulnerable spot. In the UK there is approximately 1.8 million single parents, and 90% of them are mums. And there isn’t much help or support for those struggling to keep the balance, of work, childcare and money.

On the very right is a homeless man, the whole street starts to slowly decade as you look down it, representing the poverty chain. Money is now how we measure success, and is what runs our high street, our banks, laundrettes, and everything basically.