The Department of Chemistry is celebrating the 150th anniversary of the periodic table. With collaboration from our department, a design was commissioned to be displayed in the common space located near the entrance of the Chemistry building. The client requested for the design to be related to the growth of periodic table throughout history, and for it to be produced on a large-scale and installed on the walls of the specified area.

The objective of the project was to create a commemorative wall graphic for the Department of Chemistry to mark the 150th anniversary of the periodic table. The overarching aim of the design was to provide a creative, visual aid that engages with both professional chemists, and amateurs alike. The goal of this piece, which should span the length of two walls, was to innovate and establish an aesthetically attractive take on the original periodic table, brightening up the space.

Collaborating with a client from our university was beneficial to us as it meant they were accustomed to working alongside students as well as allowing us to meet with them frequently if needed. From our initial meeting we agreed for the main contact method to be via email, but also to meet in person for updates on the project and to present ideas in the Department of Chemistry when needed. When we discussed the design direction, the client outlined potential aspects they were looking for and what we should be investigating to further our research. These involved:

Our research focused on reviewing relevant large-scale wall graphics and how they were successful at creating engaging designs in set locations. We paid particular attention to graphics with scientific imagery and timelines with an illustrative approach. We also saw a trend of bold block colours and the use of geometric shapes from these initial findings, and  from our feedback, the client was particularly drawn to these ideas and wanted them to be incorporated in the design.

Additional research was conducted where we had a meeting with a selection of the Department of Chemistry’s staff and students. They explained the periodic table’s structure and suggested potential chemical visuals we could explore. We were also directed to various scientific websites to further our research on the elements and recommended to use a Dorling Kindersley book for a simplified breakdown of each element. When discussing the design of the graphic, they showed interest in two potential directions regarding the theme: historically (showing the development of the periodic table over time), or contemporarily (displaying how the elements are used in modern day).

Beginning the process of generating ideas was a little overwhelming for all of us because our client had little idea of what they wanted and was happy to leave the design ideas completely up to us.

We began with sketching lots of ideas around chemistry and then started to build up some concepts. The three initial ideas we started with were to have Mendeleev (the creator of the periodic table) as the focus for the graphic, we would have a variety of illustrations and related text around him. We were also thinking about introducing other scientists too. Our second idea was to focus on the uses of elements in the periodic table. This way we could incorporate a lot of colour. We were concerned about copyright and thought this idea would give scope for an illustrative design. Our final idea was to have a timeline of when each element was discovered. We thought this related nicely to the 150th anniversary, as it would look back on where it all started.

We presented these ideas to our client, as well as some chemistry students and lecturers, and decided to go forward with the uses of elements and the timeline because they seemed the most enthusiastic about those. They did not like the idea of using Mendeleev as the main focus because they thought it took attention away from the other scientists.

‘All people I spoke to were very impressed with the way you have taken our random ideas and turned out a striking design.’ – John McKendrick, Head of the Department of Chemistry.

Design development and signing off the design

Once the client approved our initial proposals we started to sketch some more designs that focused on the two preferred concepts. This part fell over summer, where it became more difficult for us all to communicate, which slowed down the process more than we expected. We decided to begin drawing some visual icons to represent the uses of the elements, and then digitised them onto Illustrator. After the first illustration drafts were done, we thought about how to put them all together. We decided on containing them in boxes because this would be an effective way to connect the illustrations up in a timeline, while it would also hark back to the fundamental structure of the periodic table. The colours of the design transitioned from right to left, giving us scope to include a lot of colour and achieve the eye catching graphic we had hoped for. We ensured that all the boxes had a high contrasting colour to the illustrations and also made use of geometric shapes within the boxes to add more visual interest.

‘I can see the approach will look good on a wall.’ – Matthew Lickiss, Project supervisor

Upon completing the initial digital design for the illustrations, we focused on the timeline. We came up with a number of solutions to complement the base design, which we then took to our client for the final decision. The timeline became an informative and striking addition to the design, increasing its overall energy, and flowing the changes in colour with a subtle gradient to retain consistency.

After this process was finished, we had numerous meetings with our supervisors, where we analysed each illustration in detail and ensured that they portrayed each element well, and were all designed in the same style, retaining a sense of consistency. From reviewing them on a large screen, we realised how beneficial it was to view the design at full scale, as this gave us a better sense of how they would actually look, and the ability to iron out minor inaccuracies. These refinements took a couple of weeks of tweaking. Due to the large-scale of the illustrations, we wanted to make sure that everyone was completely happy with them. Colour testing was also very important for this project, and we carried out many test prints of the graphic as a whole at a smaller scale, as well as printing areas that we thought may be problematic.

The final stage of the design was to ensure that both our supervisor and client and our were happy with everything. Our client was very pleased and assured us that they were happy with all of the elements within the design, as well as the colours and typography.

When it comes to production, the first thing that we did was to request a professional test print to sample some of the colours included in our design. This was done on the exact material (vinyl that would be used for the final graphic. This enabled us to check whether we were happy with the contrast and vibrancy of the colours, as we would not have wanted there to be a problem with them in the final print.

The printers for the job, the Design & Print Studio, surveyed the area in which the graphic would be assembled since it was a very large scale job, and the walls had obstacles: the fitment and alignment of the graphic to the 2 pillars that protrude was of large importance. From surveying, they made the decision to change both the material and the specification of the graphic. Due to the presence of the sink they decided against UTAC vinyl, and subsequently decided that they would be able to cut out the graphic, instead of printing it with a grey background matched to the wall in PMS which was the original plan. These changes prompted us to make significant changes to our files and this was tedious, although fully necessary.

DPS required 2 separate files in order to print and cut the graphic. One would contain the main foundational squares, and the other the remaining pieces of timeline and copy. This would make it both cost effective and efficient for them to cut everything out. A problem arose when we came to split the design from 1 InDesign file to 2 Illustrator files, as the gradient of the timeline, which was designed as 1 piece, could not be easily segmented and condensed into the 1 file that was required without altering the gradient. This took great time to resolve and involved exporting the files in EPS format. We also needed to add 5mm bleed around the entirety of our design. While it was time consuming, it expanded our technical knowledge, particularly of the requirement that printers have for the setup of files regarding the production of large scale cut graphics. If possible, it could have been better to confirm the printing method, and therefore the specification for the files, at an earlier stage. This may have saved us a little on both production time and effort.

Submitting the designs as Illustrator files to the printers was unusual for us, and this enabled the printers to easily edit the graphic if necessary to their requirements. We were assured that they would download the font on their end, however during the end of our production process we identified that they hadn’t done so. We are aware that this could have been prevented, but feel that we have learnt from this mistake and that it doesn’t hinder the overall effect of the graphic. Although we did double check this with the printers, we now know to perhaps be even more thorough and not always trust word of mouth.

Over the course of this project, we collectively gained an extensive insight into working with established clientele to manufacture a large-scale wall graphic under timed constraints. The broad scope of the task often resulted in our group facing a multitude of issues regarding the conceptualisation of the design idea, however our teamwork and cooperation led to quick resolution of these minor quandaries. Our collaborative efforts as a unit meant that we were able to encapsulate what the design brief entailed, producing a visually gratifying and original take on the periodic table. Furthermore, by continuously drafting and developing the details of our initial group effort upon receiving constructive input, we were able to create a design which managed to capture what the Department of Chemistry represented in an engaging manner. In all, the project provided us with a more coherent and comprehensive vision into the field of professional design practice.

‘As I have said all along we have found working with you all a real pleasure and the end result is simply brilliant.’ – John McKendrick, Head of the Department of Chemistry. 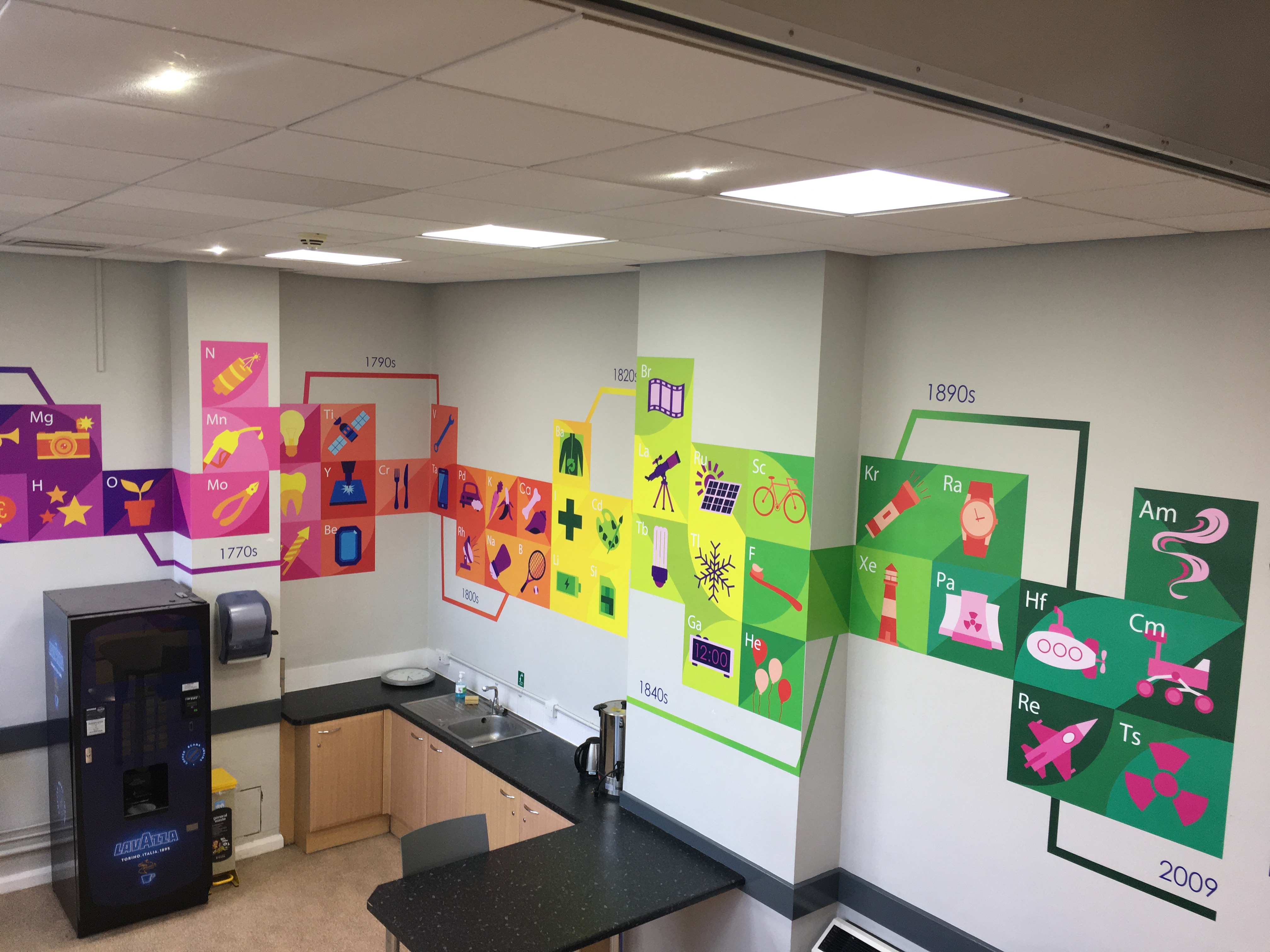 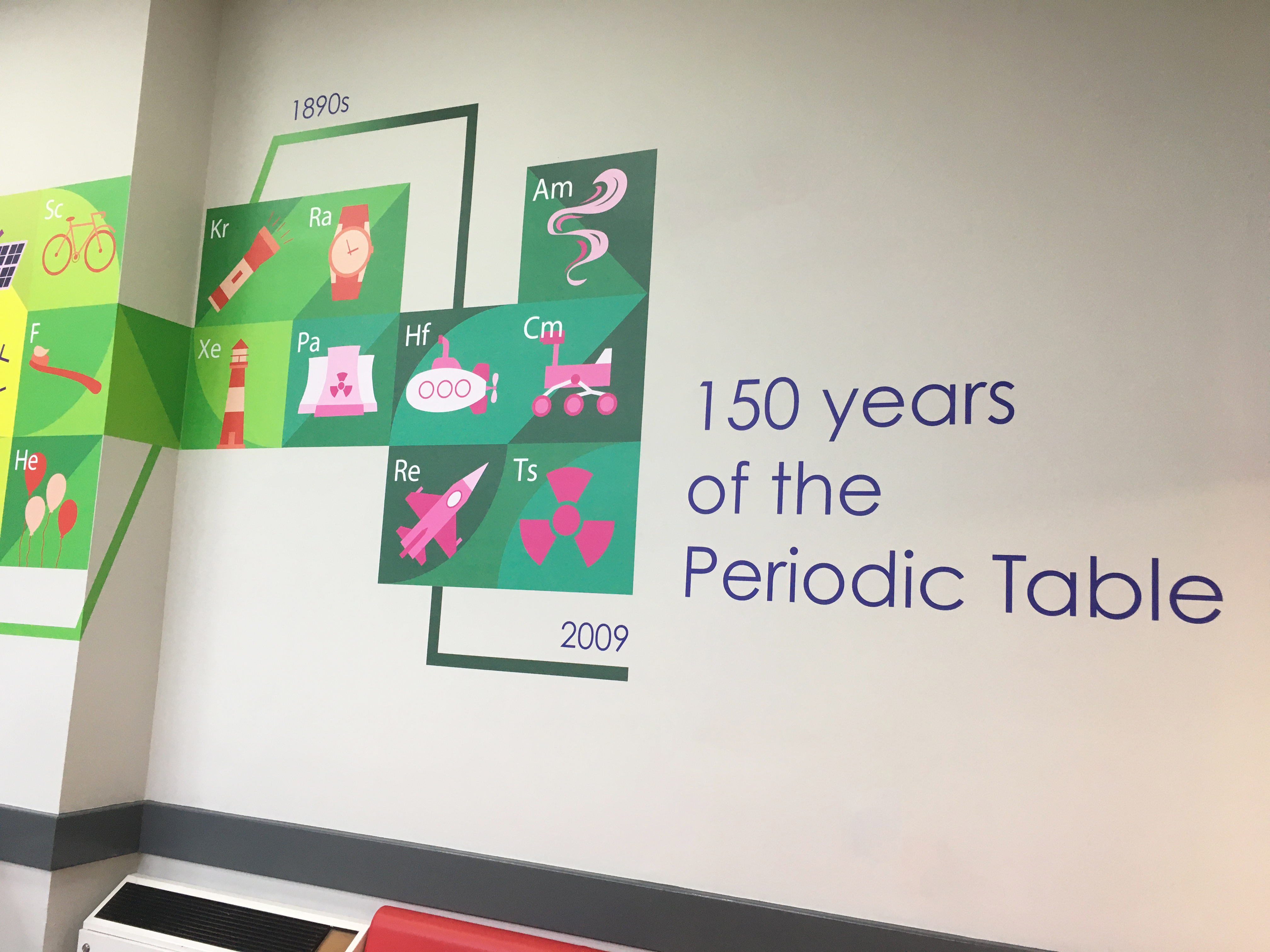