For todays session we were tasked with making an ‘ideal gift’ for one of our group members. we started the group discussion with three interesting facts about ourselves. the person I chose to focus on responding to liked to travel, painted custom shoes for clients and also owns a bearded dragon. I started by drawing out initial sketches to these three ideas, mainly focussing on the lizard for the subject. I started by drawing sketches that combined all three elements. as the session progressed, we had to pick three words at random. mine had been ‘drink’, ‘Monster’ and ‘post office’. In the end stages of my sketches I decided to finalise my best sketch that was influenced by the word ‘monster’. I decided to respond to this word by making a Godzilla poster using the lizards picture. I got a couple of images of the lizard from the team member and played around with framing within the sketches. once I chose my final one I finalised it in photoshop. I did this by erasing the background of the lizards image through a combination of the section and eraser tool. unfortunately the picture was low quality so I had to resort to using both. I then experimented with increasing the exposure and contrast to create more contrast in shadows as well as soften the edges of the lizard. I then turned it to black and white and added a red circle behind the image and setting the blend option to darken which created a spotlight effect. the circle also represents Japan which is one of the scenes of some of the Godzilla films, also linking back to my team members hobby of traveling. I decided to finalise the image by adding some png logos of the recent film ‘Godzilla, king of the monsters’ to make the message more clear. 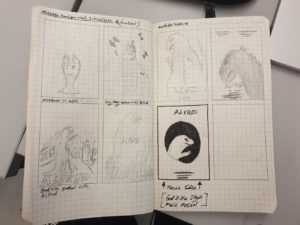