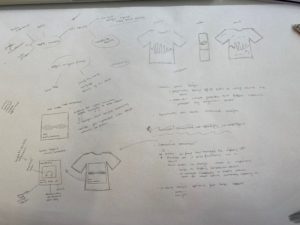 In the seminar, Matt’s interests were:

I wrote out a few ideas for each and then came to the conclusion that my best option would be an idea of combining music and t-shirts.
My initial idea being a series of unique signed t-shirts for bands that he liked, however I ended up making it a bit more interesting and going down the idea of a touch screen t-shirt that would allow you to connect your phone to it and then control/display the music that you’re listening to from the shirt itself.
Another idea would be that when not connected the t-shirt would display preloaded album covers of Matt’s choosing and cycle through them automatically with the option to change manually with a swipe on the screen.