Ever played one of those ‘Guess the logo’ games? At the beginning they’re easy enough to get and as you go towards the harder levels you have to start puzzling together the less known logo names by guessing what the letters are. You imagine what shapes could go in the gap, which would be the most likely. Well today has definitely taught me I need to go back to playing them some more as I need to pay more attention to the letter shapes!

On the left is the sample text we were given, from this we were told to write ‘cadbury’ in the same font. Bellow you will see my attempt at doing so.

As you can see my photography skills needed some work, focusing on the text though one can tell immediately that i did not track ahead of time. Another thing I needed to improve upon is the proportions of the letters, as the bowl of the a is much too high. Once we compared the attempts to the actual font it also became apparent I needed more weight at the top of the c and the y was more linear than curved. Moreover the top of the letters only have serifs to the left not both ways as I did on the u and y.

Having looked at my previous mistakes we tried another type of exercise. To find the hidden part of the letters. We were given the template on the right. Where do I go from here? I attempt to visualise the rest of the word of course! I had my logo game training, so I can see it’s obviously adell! Wrong. Luckily someone discovered that upon highlighting the word and right clicking it asks if you want to look up “aden”, mistake averted. Knowing the actual word then made me look back and question how I could have thought it was adell… the spacing between the two stems is much to far apart, it has to be an n. 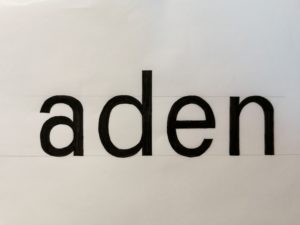 I used the letter shapes present to trace and check then letters I created before colouring it all in black for better contrast. The result can be seen on the left. From the d I traced the angle the a needed to split into a separate stroke and it’s thickness, tracing the first part of the allowed me to flip it in order to see where the second part should be. I also used the d to create the top of the n as I did for the bottom half of the a. Whilst it’s still not the exact same as the font this attempt is much closer to it than my previous attempt. I also downloaded a scanning app to improve my photography and overall am quite content with the outcome of todays project. I also decided I should play more guess the logo games again in order to sharpen this skill further and pay more attention to individual letter shapes.