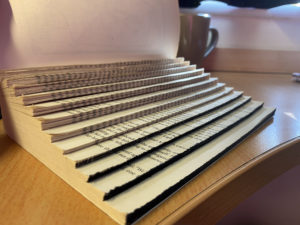 My initial idea for the broken narratives project was the stairway narrative, in which the protagonist finds themselves in an asylum for a mild illness, the asylum has 7 floors, the floor you’re on depended on the severity of your condition. The protagonist found themselves being moved down the floors until they were at the very bottom which seemed to represent death.

My idea for the design was to turn the book into physical steps, I then coloured the edges of the lowest steps black to fit the representation of death.