ROSES is the Reading online sports economics seminars held every Friday. The seminars are organised by our client James Reade who also promotes the seminars on social media and posts them on Youtube. In the past James had either made posters for these seminars himself or asked a colleague to design them on photoshop which James was pleased with but from a design perspective they weren’t very effective and had a lot of issues with alignment and consistency.

The brief was a simple process for this job as the client made it clear what he needed, we needed to design posters for the ROSES seminars and to find an accessible way for James to replicate our designs for future talks. The posters and the template needed to be versatile to deal with different levels and amounts of information which the original poster designs we were shown did not handle well but James expressed that he enjoyed the rule used in the original posters as well as stating that the posters needed to look professional and the images used needed to reflect the subject matter of each talk.  As for the template, the client was very open minded about how we created the template and what format we used, as long as it was accessible and effective.

This poster had several uses all on digital platforms, as an email flyer, poster on social media, and first slide of online weekly presentations. These all had to vary whilst also being clearly consistent as a series. For this real job, we needed to consider the user and the reader. This made the job considerably more difficult. When considering the user of the template ­­­– our client, we first had to attain what software he had available to him. We explored simple free design software that could be used such as adobe spark and sketch. However, after we found that the most accessible software also worked in the correct dimensions; 16:9.

This was primarily the visual design, we needed to ensure the template produced a visually engaging, informative, and also reflective of the content of the poster. The typeface we chose was inspired by those found on football shirts. This typeface is also available to download for free with google fonts. The box we used that held all the information mimics the sports announcements appearing on television. The imagery takes the main focus thus why a box was most effective as it was least obstructive.

The original posters used for ROSES, from a perspective of a non-designer appear to be modern and professional but from our perspective, the posters lacked an effective structure and it was clear no guides or clear rules were used for any of the elements of information. The images used were also not carefully considered or positioned, some images obstruct the legibility of the type, as well as this, the hierarchy of the typography seemed to be lazy and not well organised with the names of the guest speakers in very large, bold type which we understood the client enjoyed but with the name so large, it created more issues than it solved and with particular name lengths, the white rules became too small and unbalanced. 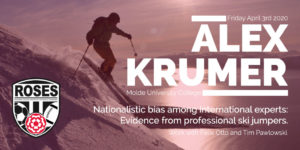 To begin with, we created different approaches to poster layouts that we got peer feedback on to help us choose which layout to take forward and develop.

After our initial client meeting, we both went away to come up with as many visual outcomes as we could. We felt a banner over the image as shown enabled a clear section for information, whilst still allowing the image to be prominent. Our next main concern was to create a template that had as few possible points of error, meaning keeping manual intervention low, and where it was necessary minimal. Our client was very clear on wanting a rule, so we used one to divide up our information, so we implemented a red one with the same red as the logo to tie the components together. 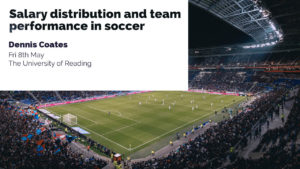 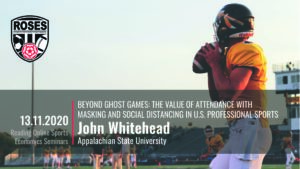 Taking forward the poster layout that received the most positive feedback, we developed iterations of the poster and took this to our supervisor who helped us to refine the poster iterations to a refined design to be sent to the client. The adjustments made mostly surrounded the hierarchy and positioning of the text, we reduced the amount of different type sizes to just a couple of paragraph styles. The positioning of the text was carefully thought out as we needed to make sure that future posters with longer titles or longer dates would not make our design fall apart, we ensured this wouldn’t happen by shortening the format of the date and adding a rule to separate the date from the title and speaker name of the seminar which meant that the information for the poster could be placed and adjusted within a neater, tighter rectangle across the image with a tint behind the text to reduce the interference with text and image and therefore increasing legibility.

The final design has banner, as we felt this visually conveyed how sports announcements are made in the industry (television). We had less variation in typography, it instead had intentional use of white space to indicate hierarchy with more subtlety and elegance. We also decreased the weight of the rule to stop it from drawing away from the image and information too much. We added ‘Reading Online Sports Economics Seminars’ as we felt it was not clear without what exactly ROSES was and therefore a potentially interesting target audience could miss their opportunity. 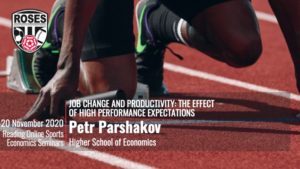 Once we had decided on the final design, we then had to make it as a template. Our first challenge, as some of the talk titles were 2 lines and some were 1, was having the box be self-adjusting. This we were able to achieve by adjusting the padding and changing the box settings. The next challenge was to ensure the paragraph styles were set correctly, this had to be done so replicating the same order of styles could be easily achieved by the user. Then we had to tackle the guide putting guides in place to indicate where the components should be placed so there is no variation between outputs. Unfortunately, the rule was the one part of the template we couldn’t automate. Since this is simply adjusting the rule to align with the top of the text, we wrote clear instructions for the user and felt this was the best way to keep the effective design, with limited interference from the user.

James Reade, our client was very open minded about the process of making a template which helped as it allowed us to explore multiple platforms and ways of creating a template. Throughout the process we maintained contact with him through email, although his replies often meant pushing back our meetings, particularly towards the end of the project as we were hoping to talk James through how to use the template (despite the template including instructions we thought having a chat on top of this would be ideal) before the Christmas break but due to James being busy with his own work and a lack of communication from his side, this chat has been pushed back and therefore extending the project. However, this isn’t a detrimental issue as the deliverables for the project are completed and apart from this issue our client has been very helpful throughout the process.

This project has been highly beneficial for our personal skills due to the research we carried out when looking for the appropriate software for a poster template. The powerpoint template is a skill we can use in the future whilst simultaneously keeping in mind the client’s needs and knowledge of software, as rarely clients will know how to use or have access to the adobe cloud. Although we had creative freedom on this project, designing a template for specific information was limiting however, we feel that we dealt with these limits well and produced posters and a poster template James Reade can effectively use for future ROSES seminars.