For todays brief, we were asked to find an unwanted book to manipulate. We were then given a sample of different blurbs that we had to choose from. With the blurbs we had to identify interesting features in it, so that we could manipulate our books to visually interpret them. I decided to go with the theme of ‘Loop’. its blurb depicted a man getting sucked into a book to witness a murder. I started to highlight interesting words, so I could see what I could recreate from the blurb. I decided that I wanted to play with the man originally getting sucked into the book, and the victim reading a book before he’s murdered. I realised that they are both reading books which I could use to link them. I had researched some examples of artists manipulating books and found ‘A Passage’ by Buzz Spector (1994). I liked how he had ripped each page out, creating a ragged and warp line for each page. The pages also descend in hight, creating  a landscape in the book. I thought I could create this effect but cut out a ragged whole in each page, so it would create a portal like effect. I decided to respond with this idea as it suggested whoever picks up the book, takes on the role as the man (in the blurb) who gets sucked into the story, to watch the murder take place, they would then get sucked into the victims book, taking them back to the initial stage, thus creating a loop. I did this by sketching out a distorted shape on the first page, slipping the cutting matt under it and then cutting it out. I then slipped then next page onto of the matt so I could use the first cut out as a template for cutting the second page. for each page I used the one prior as a template, slowly cutting smaller and smaller shapes to create a sloped effect. I also played around with distorting the shapes more by weaving in and around the previous cut out, creating a wave like effect which looks like a portal. 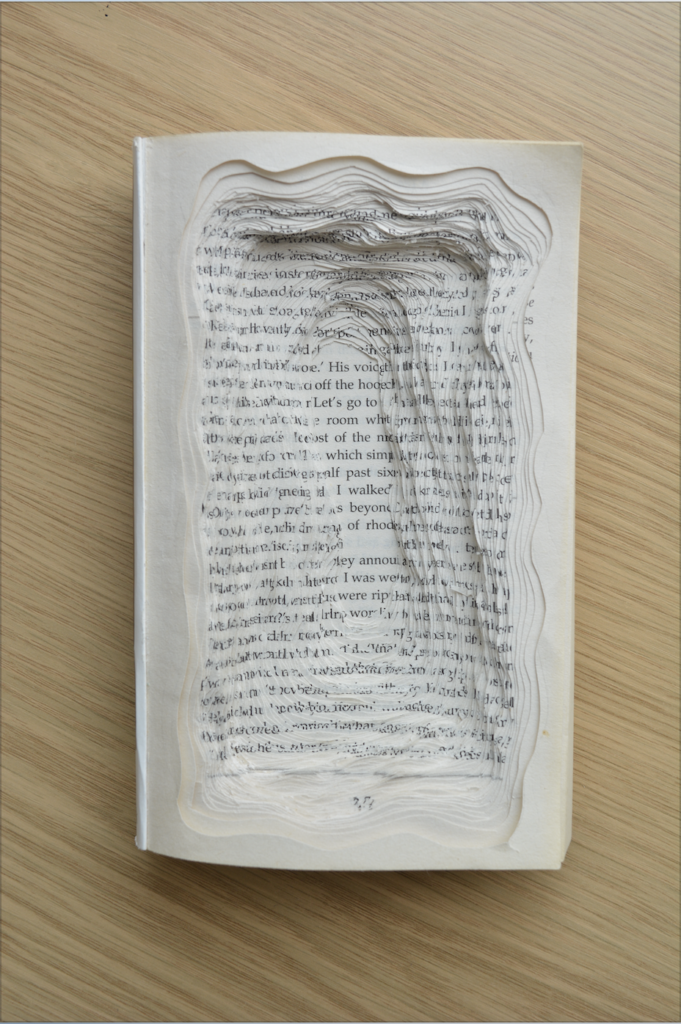