For the project ‘Broken Narratives’ I chose the theme of ‘Staircase’. As the brief stated, the man had an unknown disease. I wanted to create a book that looked as if it was also diseased. To create this, I used glue and tissue to make a 3D textured effect to look damaged and cut open. I then used acrylic paints to show the colours of decay.

On the inside of the book, following the brief of the man being moved downstairs, I wanted to create the effect of stairs falling into an abyss, where that man was lying. To do this, I used my craft knife to cut out a series of different sized squares to look like stairs. I then drew the man at the bottom floor. I also painted the pages black to represent a feeling of hopelessness and painted some stairs that didn’t lead to any particular direction to represent no way out. I enjoyed creating this project and felt that it encourage out of 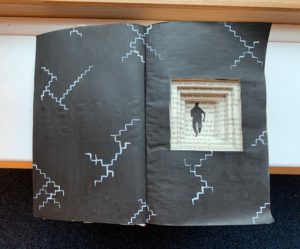 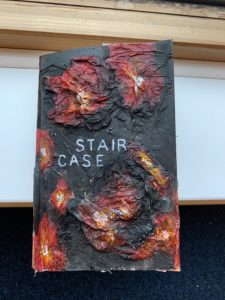