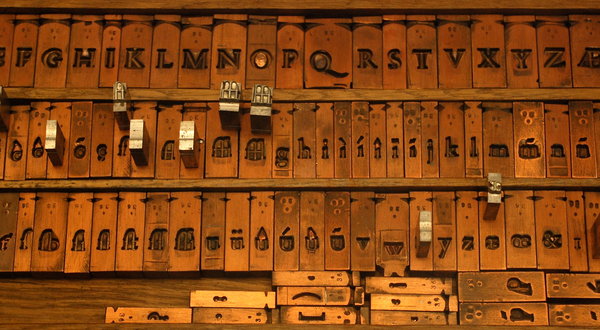 There was a day when type had weight. Not as in bold or extra bold; as in 7 pounds 8 ounces.

That is the weight of the steel punch that was used to produce a 120-point capital A in the typeface Romain du Roi. The roi in this case was the Sun King, Louis XIV of France, under whose reign the typeface was begun in 1694 at the royal printing house, the Imprimerie Royale.

A punch is a precise sculpture — a three-dimensional letter form in reverse — that is struck into a small copper slab known as a matrix to create a mold. From this mold, individual pieces of type can be cast, again and again, in molten lead. It took about 65 years to make all the punches and matrices that are needed in the 21 fonts that compose Romain du Roi: each a different size, from 4 to 120 points, with upright and slanted letters, capital initials, numbers and punctuation.

Hundreds of historical punches and matrices of various typefaces and dozens of books are on view at the Grolier Club in “Printing for Kingdom, Empire & Republic: Treasures From the Archives of the Imprimerie Nationale.” (It ceased being Royale in 1789, as did everything else in France.)

This is the first time these exquisite artifacts have been shown outside France, said H. George Fletcher, a club member who is the curator of the show. Their arrival could not be more timely.

They offer a reminder, in the ethereal era of bitmapping, that type was once the tangible province of engravers and metal casters who labored in unforgiving but enduring media. To make a C with a cedilla, for example, involved a lot more effort and thought than holding down the Option key on your Mac. A comma-shaped steel appendage had to be lashed with string to the bottom of the C punch to produce a new matrix.

“People are practically printing books with their smartphones,” Mr. Fletcher said, in a tone suggesting that he did not think this was such a good idea. “It’s much more gratifying to be able to touch something and find out it’s real, rather than a matter of bits and bytes.”

Mr. Fletcher, 70, is a former curator at the Morgan Library & Museum and the retired director of special collections at the New York Public Library, so his assessments carry special weight. He paused appreciatively before a copy of “De Imitatione Christi,” the first book printed by the Imprimerie Royale in 1640. “It suits the grandeur that is France,” he said.

James Mosley, an eminent scholar of printing, identified the type in “De Imitatione Christi” as the work of Claude Garamond, or Garamont. That name ought to be familiar to anyone who has ever pored over type specimens. It is one of the many faces named for type founders, punch cutters and designers: think Baskerville (John), Bodoni (Giambattista), Caslon (William) or Gill (Eric).

Garamond was such a valuable brand, it was even applied to faces he didn’t design, like 17th-century types now called Romain de l’Université or Caractères de l’Université, by Jean Jannon.

“During the 19th century, the glamorous name of ‘Garamond’ was given to these types,” Mr. Mosley said in an e-mail. “It was ‘glamorous’ because he was an almost mythical historical figure.”

Typography, glamorous? Philippe Grandjean, the punch cutter responsible for Romain du Roi, probably didn’t see it that way, despite — or perhaps because of — the royal warrant. “He was working for a committee,” Mr. Fletcher said, “so you know what kind of responses he got.”

Grandjean’s punches were repeatedly rejected and destroyed, while his design drawings were being altered constantly. When his type was first used in 1702, for a history of the Sun King’s triumphs, Grandjean was named in the preface. That text was removed. “The suppression of the preface ensured that only one name remained prominent: that of the king himself,” Mr. Mosley wrote.

Politics claimed other victims. The Romain de l’Empereur was designed by Firmin Didot at the time of Napoleon’s ascension. “You had a new emperor, you needed a new typeface,” Mr. Fletcher said.

It was used only once, to print the coronation album. After Waterloo, there wasn’t much call for it.

But the punches and matrices for Napoleon’s typeface survive. They underscore just how little printing changed for centuries and how profoundly it has been transformed in recent decades. Seventeenth-century copper matrices have much in common with the brass matrices found in Linotype machines, which were used to set this newspaper until 1978.

At The New York Times, nothing physical remains from the days of hot type. It is miraculous that the Imprimerie Nationale has preserved a patrimony dating to the dawn of the French Renaissance, including 230,000 steel punches, 151,000 copper matrices and 224,000 Chinese ideograms that were carved in boxwood during the regency of Philippe II, some of which are at the Grolier Club.

The club, founded in 1884, is devoted to the art of the book. It is named for a 16th-century French bibliophile, Jean Grolier.

The letterpress catalog for the show was printed by the Imprimerie Nationale and composed at its Atelier du Livre d’Art et de l’Estampe. In Garamond, of course. The impressions made by the letters are so deep, you can feel them when you run your hand across the pages.

It is the emphasis on the physicality of type that makes the Grolier show so useful and — in the words of Nelly Gable, a punch cutter working for the Imprimerie Nationale — so lyrical.

Describing the creation of a ligature combining g and y, one of many such ligatures on display in the show, she wrote, “What plenitude of forms — the slopes, polished like mirrors, the gentle inclines that safeguard a particular angle, the fragile but vigorous swelling curves — monumental, a thing of beauty: a type founder’s punch.”

“Printing for Kingdom, Empire & Republic: Treasures From the Archives of the Imprimerie Nationale” runs through Feb. 4 at the Grolier Club, 47 East 60th Street, Manhattan; (212) 838-6690, grolierclub.org.