Typography papers here returns for its fifth volume in seven years. There are several obstacles to our aim of appearing annually, so we ask for the continuing patience of our readers if we decide, for example, that it remains better to set off with our carriages full than to depart on time but half-empty.

In this issue we publish two accounts of design process, each providing rich insights into the context in which decisions get made – both at the drawing board or computer terminal, and also in the meetings room.

Edward Ragg questions Paul Luna about the designing of the Oxford Shakespeare within a crowding market for bardery. The roman style signals that this is not a book but a gathering of work which took shape as a group of separate editions. These included the Complete works, available in a single volume but offered in two formats and two orthographies.

In a paper which is in part a reply to Alan May’s in the first volume of Typography papers, Paul Shaw describes letters on fragments of what may have been a major public inscription of the Trajanic era. (They were discovered in Trajan’s Forum, in the centre of Rome, just four years ago.) He argues, after close inspection of traces of surface working, that there is evidence here to support a method of making bronze inscriptional letters somewhat different to that proposed by Alan May.

John Morgan’s documentary account of the designing of Common worship offers not only pictures of working papers from the design process (sketches, marked copy and proofs, trial settings, and forms – many of which can now be seen at the St Bride Printing Library, London) but also fifteen documents which suggest the lively and engaged character of the exchanges between designers, clients, and representative readers.

Eric Kindel’s recollection of stencil letters is the most thorough survey yet published of an often disconcerting category of letterforms in which, as he says, conventions of letter shaping may be wilfully disintegrated, disfigured, and abstracted. His copiously illustrated study is based upon careful observation of artefacts and also upon some judicious reconstruction work. For any future work on stencilled letters, Eric Kindel’s paper will be the starting point.

Ole Lund traces a remarkable public debate about typography. It started in early 1959 – continuing for around two years – in response to the sets of letterforms designed by Jock Kinneir and Margaret Calvert for use within the sign system which they were designing for Britain’s new motorways, and later its whole national road network. The argument was ostensibly about legibility and propriety, between the claims of capitals with serifs against sanserif small letters. Kinneir and Calvert’s work pointed to the potential value of design in modern public life, and indeed the debate was about design as a visible form of social philosophy. Ole Lund’s work in the archives brings the arguments to life and at the same time corrects some partial and misleading accounts already published.

The Oxford Shakespeare is the most authoritative, and radically revised, collection of Shakespeare’s work. This interview charts the genesis of the first computer-generated Shakespeare and the design issues faced by Paul Luna and his colleagues at OUP. The texts discussed are: William Shakespeare, The complete works (Oxford: Clarendon Press, 1986, large edn. released in both old- and modern-spelling versions) (figure 1); William Shakespeare: a textual companion (Oxford: Clarendon Press, 1987); William Shakespeare, The complete works (Oxford: Clarendon Press, 1988, compact edn. in modern spelling only) (figure 2). All are under the general editorship of Stanley Wells and Gary Taylor, apart from William Shakespeare: a textual companion by Stanley Wells, Gary Taylor, John Jowett, and William Montgomery. Single editions of plays with individual editors are published in the Oxford World’s Classics series under the general editorship of Stanley Wells. (figure 3). The interview was conducted on 12 August 1999 at the Department of Typography & Graphic Communication, University of Reading, as part of research toward an MA dissertation in Publishing at Oxford Brookes University: Edward Ragg, ‘Controversies of the iconic: the Oxford Shakespeare 1978–1987’ (Shakespeare Institute Library, Stratford: catalogue no: q PR 3071).

In Typography Papers 1 (1996), Alan May explored several methods of infilling square-cut Roman inscriptions. This article draws on the recent discovery of an inscription in the Foro Traiano whose square-cut letters are outlined by a series of grooves. It challenges Alan May’s conclusion, and instead postulates the use of a method involving metal pattern letters.

John Morgan:
An account of the making of Common worship: services and prayers for the Church of England

This paper, compiled from first-hand experience of the job, tells the story of the making of Common Worship. The design process is revealed in documents and artefacts pulled from the shallows of everyday exchanges between designers, clients, and readers. By ‘thinking-out-loud’ and placing design procedures in their normal context, this article aims to let the job speak for itself.

There has been some recent interest in Jock Kinneir and Margaret Calvert’s influential traffic signs and accompanying letterforms for Britain’s national roads from the late 1950s and early 1960s. Their signs and alphabets prompted a unique public debate on letterform legibility, which provoked the Road Research Laboratory to carry out large-scale legibility experiments. Many people participated in the debate, in national newspapers, design and popular science magazines, technical journals, and radio. It was about alphabets and signs that would soon become – and still are – very prominent in Britain’s ‘visual landscape’ and elsewhere in the world. The debate still surfaces occasionally, often with the facts severely distorted. This article, supported by studies of archival sources, traces the public debate.

Typeset in Monotype Ehrhardt and formatted in QuarkXPress at the Department of Typography & Graphic Communication, The University of Reading

© 2003 Typography papers the authors and Department of Typography & Graphic Communication. 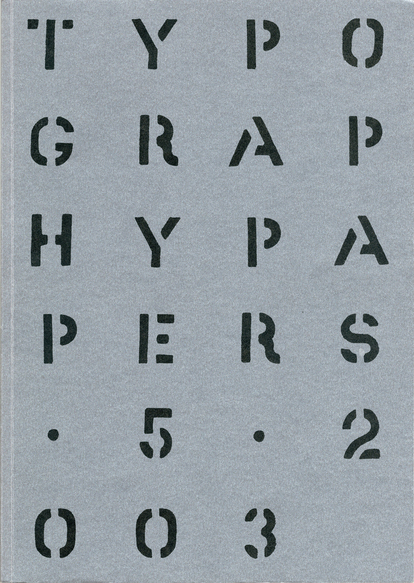 John Morgan:
An account of the making of Common worship: services and prayers for the Church of England [PDF]