This issue is broadly concerned with the notion of ‘interpretation’ of meaning and ideas; we welcome the dialogue that is introduced in several of the contributions.

The detailed typography of dictionaries with its potential to articulate meaning to a very fine degree is the topic of Paul Luna’s richly-illustrated article. He traces the development of macro and micro visual organisation in dictionaries from the seventeenth century to the present day.

The debate between Max Bill and Jan Tschichold, conducted in Switzerland in the immediate aftermath of the Second World War, has come to be recognized as a classic exchange of views about typography and its wider implications. The articles by Bill and Tschichold are now brought together for the first time in an English-language publication. Paul Renner’s reflections on the debate and the debaters, translated and republished here for the first time, add an important new dimension to the exchange.

Peter Burnhill reports on his investigations into the typography of Aldine editions, which have led him to the suggestion that this printing shows a unified system of dimensions. He introduces this discussion with reference back to an exchange of views about typography and writing published in Typography papers 2, and to a recollection of an earlier exchange on related questions in The Journal of Typographic Research. In the same spirit of debate, we invited responses to Burnhill’s theses, so that the discussion could become a symposium. This debate is open-ended, and indeed we hope that it can be  continued in a future number of Typography papers.

This paper considers the development of a core set of typographic conventions between 1604 and 1750; the development of more complex typographic solutions for the scholarly lexicography that was foreshadowed by Johnson’s dictionary of 1755, and reached its zenith in the great national dictionaries of the nineteenth century, foremost the OED; and the effect on both lexicography and typography of the computerization of dictionary compilation and production since the 1960s.

This is the first publication together in English translation of ‘Über Typografie’, by Max Bill, and ‘Glaube and Wirklichkeit’, by Jan Tschichold. These essays constitute a seminal dispute of 1946, which can be seen as a defining moment for the Swiss typography that developed fully in the 1950s. The two essays are brought together for the first time with a later contribution by Paul Renner from 1948, ‘Über moderne Typographie’. Considered as a whole, this debate raises significant practical and moral issues concerning typography. The original German texts are also given here.

First published in Schweizer Graphische Mitteilungen, Jhg 65, Heft 4, April 1946, pp. 193–200. Bill’s use of Kleinschreibung (no capital letters) has not been carried over into this English translation, but it has been retained in the original German text below. Two typographical errors in the original German text have been invisibly corrected. The design of Bill’s text was a departure from the customary layout of the journal, with a single column of ranged-left sanserif text, printed in a dark grey.

Debates over the ideas of ‘writing’ and ‘typography’ provide the introduction to Peter Burnhill’s report on an investigation into dimensional co-ordination in typography. Consideration of the relation between writing and typography suggests another look at the infancy of printing, when the systematization that is inherent within typography was being worked out. Burnhill started this research with the clues provided by the ‘risen spaces’ that are occasionally visible in the printing of Aldus Manutius. From this evidence, he argues that Aldine printing was informed by a unified system of control – of type size and character proportion, as well as of the larger components of vertical and lateral measure in text-setting. These arguments are then discussed in a set of responses from colleagues who read the paper in pre-publication form. Paul Stiff’s ‘Spaces and difference in typography’, which then follows, adds to his discussion of Burnhill a critique of some ideas of Gerrit Noordzij,   which Burnhill takes as the starting point of his paper. Finally, Burnhill replies briefly to his critics.

This response to both Peter Burnhill and Gerrit Noordzij gathers a number of threads. Peter starts by referring to the exchange between Gerrit and Robin Kinross in Typography papers 2. That exchange continued, in turn, a discussion aound 1992–4 in Budapest, Antwerp, and London, in which I also took part. Peter then points back to a debate between Ernest Hoch and John Mountford in the late 1960s. This continued in various guises into the early 1980s, and took its final form at Reading under the hospitality of the Working Party on Typographic Teaching. The participants then included Peter, Robin Kinross, Richard Southall, and me, among others. In passing I should note that Peter’s mention of Ernest Hoch points also to the more vigorous – a better word may be vicious – exchanges about type size description which took place from the late 1960s through to the mid 1980s, when they were more or less killed off in San Jose by the solidification of lead in the vocabulary of digital typography. This topic – concepts of and designators for type size – was partially exhumed in the first issue of Typography papers by Andrew Boag.

© 2000 Typography papers the authors and Department of Typography & Graphic Communication 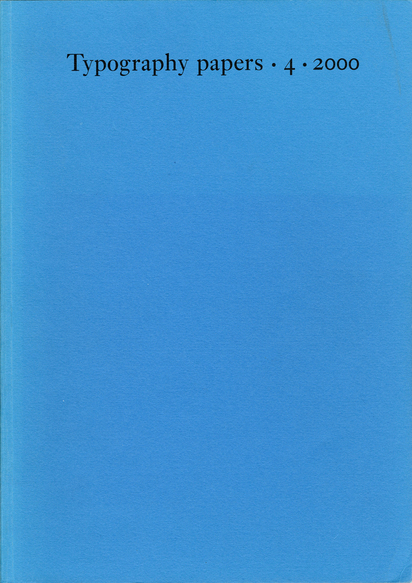