In this its seventh volume, Typography papers continues to rewrite the history of letterforms.

Over 40 years Hendrik Vervliet has produced a series of magisterial contributions to our knowledge of 16th-century French type design, the source of canonical forms of Western printing type. In his second systematic survey to appear in these pages, he examines the early career of Claude Garamont during a decade of remarkable productivity among Parisian punchcutters. Vervliet establishes a convincing chronology for Garamont’s work, corrects some earlier misattributions, and identifies a so-far anonymous master.

Professor Vervliet began his work fifty years ago in Antwerp at the Plantin-Moretus Museum, the admirable institution to which Justin Howes had intended, just before his untimely death two years ago, to make an extended working visit. Justin’s obituarists were able to say little of his last major project: research, supported by the Arts and Humanities Research Council, into the discourse of letters during the eighteenth century. Here, in valediction, we offer a brief insight into one theme emerging from his work: contemporary notions of ‘progress’ in letter design, and of its potential for ‘perfectibility’.

It may be widely assumed that the first constructed ‘geometric’ sanserifs were a by-product of modernist typography in the 1920s. But over forty years before the creations of Herbert Bayer and Joost Schmidt at the Bauhaus, an American in Paris promoted a device for generating such an alphabet, at the Exposition Universelle of 1878. Eric Kindel explains the ‘Plaque Découpée Universelle’, and situates it within both contemporary French culture and early twentieth-century experiments in letterform design.

The documents of everyday life can be more revealing than self-consciously artistic productions. Sue Walker shows that the relatively unexplored field of readers for young children is likely to yield riches to a patient investigator. She examines the letterforms used in such books in the early twentieth century. Campaigners for handwriting reform and print script carried weight among educational publishers; they must have encouraged the relatively early use, in Britain at any rate, of sanserifs in continuous text. They may also have encouraged other kinds of innovation in book design.

A search of the website of the Royal College of Art in London for the Graphic Information Research Unit yields nothing, as does its previous name, Readability of Print Research Unit. Research contracts may come and go, but the loss of collective memory for a substantial body of investigation could be permanent. Linda Reynolds corrects this lacuna with a review of the Unit’s 16-year history of research into, for example, the legibility of scientific and technical information, the design of bibliographies and library catalogues, and the design of wayfinding systems in libraries and museums. She provides a valuable checklist of the Unit’s publications.

In a contribution which first saw public light at the ATypI conference in Rome, 2002, and which now appears in English for the first time, Giovanni Lussu briskly works over three longstanding clichés: that graphical depiction started the process that led to writing, that the only ‘real’ form of writing is alphabetic, and that writing is merely a representation of the spoken word.

This paper investigates the early career of Claude Garamont as a designer of the new form of roman type which appeared in Paris during the 1530s and which came to dominate Western typography for the following two centuries. The materials for the enquiry are, principally, the 3,500 or so books printed and published in Paris in the 1530s. The paper first discusses the available sources, the actors on the scene, such as Colines, Constantin, Augereau, Gryphius and Garamont, the role of Paris as a centre of type design, and the methods used in this inquiry. It attempts to account for the origins of the Paris types, attributing half of them to named punchcutters. It highlights especially the young Garamont’s work – starting in the mid 1530s – and corrects some earlier misattributions. It identifies the anonymous ‘Estienne Master’ as Maitre Constantin. In the second part of this paper the typefaces are described in order of size and date. Two summary tables, arranged respectively by date and punch-cutter, conclude the study.

On 15 February 2005 Justin Howes circulated this paper to the members of Reading’s postgraduate research seminar in typography. At its Thursday meeting two days later he projected and commented on a sequence of pictures – those ‘examples of “improved” types, “perfect” types, and “extreme” types’ to which he referred in his second paragraph. The paper explores one theme emerging from his doctoral research into eighteenth-century types and letters: contemporary notions of ‘progress’ in letter design, and of its potential for ‘perfectibility’. Justin Howes died suddenly and unexpectedly of heart failure on Monday 21 February 2005. The members of his advisory group have assembled his text and pictures into a relationship on the page which we think fairly represents his intentions for that February meeting. His text has been given the lightest of editorial touches, and we have added captions and a few notes.

This short essay investigates the ‘Plaque Découpée Universelle’, a lettering device invented in the United States in 1876, and exhibited and sold in Paris at the 1878 Exposition Universelle and elsewhere. The device and associated promotional items are shown, and the concepts underlying its geometric sanserif characters explored through patent documents and promotional texts. The invention is then broadly situated relative to contemporary French education and culture, and to early twentieth-century experiments in letterform design.

This essay is about letterforms and typography in reading books for young children and how they were influenced by the teaching of handwriting in the early decades of the twentieth century. I examine the contributions made by infant teachers to typography and book design and draw particular attention to the print script movement and the gradual introduction of sanserif typefaces in reading books. I suggest that the use of sanserifs in reading books for young children is one of their first appearances for continuous text. Although the influence of print script on the teaching of handwriting may have had some undesirable effects, I suggest that it indirectly contributed to some innovations in book design.

The Graphic Information Research Unit, initially known as the Readability of Print Research Unit, was set up by the typographer Herbert Spencer at the Royal College of Art, London, in 1966. Over the next 16 years the Unit carried out a variety of studies on the legibility and usability of printed and on-screen materials. Much of this work was funded by the British Library and related to issues such as the legibility of scientific and technical information, the design of bibliographies and library catalogues in print, in microform and on videotex, and the design of wayfinding systems in libraries and museums. The Unit’s approach to its experimental work is of particular interest, as it utilized the combined skills of typographers and a psychologist/information scientist. The results of a number of the studies are still of practical relevance today, and it is argued that the work of the Unit and its members has reached a surprisingly wide range of interest groups. The paper includes a list of the Unit’s published reports, plus other items arising either directly or indirectly from the Unit’s funded research.

Giovanni Lussu:
The form of language

This article began life as a lecture given at the 2002 conference of the Association Typographique Internationale in Rome. It was then published as ‘La forma del linguaggio’ in Progetto grafico, no. 1, July 2003. This is its first appearance in English.

Typography papers [7] is edited and made at the Department of Typography & Graphic Communication, University of Reading (www.reading.ac.uk/typography) and
published by Hyphen Press, London (www.hyphenpress.co.uk).

Typeset and made-up using Adobe InDesign CS2 with typefaces from the OurType Arnhem family by Fred Smeijers, Antwerp. Thanks to Fernando Mello for character outlines for the margin figure (p. 17) and figure 5 (p. 79), and Caroline Sawbridge for figure 16 (p. 128).

Printed on Book Design Smooth 120 gsm (by Vida Paper AB) in the Department of Typography & Graphic Communication, University of Reading.

Copyright © 2007 Typography papers, the authors, and the Department of Typography & Graphic Communication. All rights reserved. No part of this publication may be reproduced, stored in a retrieval system, or transmitted in any form or by any means, without the written permission of the copyright holder. 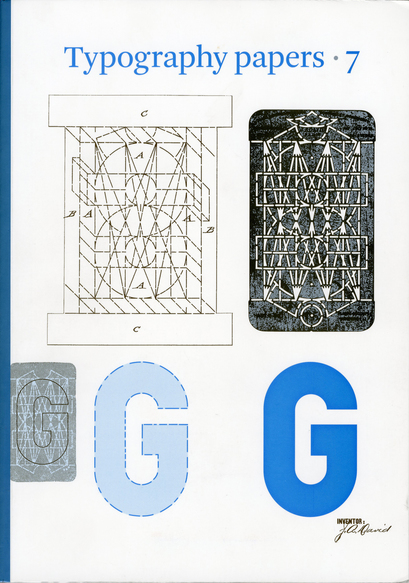