Whatever else it is claimed to be, typography is design for reading. We would say that; but the surprise is that it still needs saying. It is hard to be wholly optimistic in publishing papers about typography: there are too many reports about reading’s demise, especially among the generation for whom Emigre’s bulletins offer a more friendly first call than the pages of, say, Information design journal. But when we hear that ‘reading is in decline’, we know that this is an old refrain, and also that particular kinds and cultures of reading are being invoked.

Typographic culture has often had a neurotic edge, which presents in obsessive formalisms, and in the self-satisfaction of the comfortable just as much as in the self-inflation of the nouvelle. This, aside from slender resources, is why we see virtues in plainness in both writing and production. And in time we shall see if Typography papers can avoid the jinx familiar to typographic serials: we intend to re-appear, when we are ready, in 1997.

In a field as diverse as typography, without a settled home, there is always some risk of interdisciplinary messiness, even of marginal life on the boundaries between one discipline or one practice and another. Typography papers will be hospitable to a variety of positions: it takes a generous view of typographic designing as both a social activity and as a subject for critical enquiry. And Typography papers is anglophone but not anglocentric, as we hope to show in this first issue.

So much by way of apology. Now, an introduction to our papers.

Maxim Zhukov observes that one peculiarity of Cyrillic is its tolerance of alternate versions of letters, and he points to some features of letterforms that need to be accounted for in the design of Cyrillic-script typefaces. (We thank Emil Yakupov at ParaGraph International, Moscow, for his generosity in lending us typefaces.) Paul Stiff essays the absent centre of typographic designing – specification, which emerged as a characteristically modern instrument of control over decisions which once had been made in the workplace, and as the means by which designers sought to achieve ‘quality’. He suggests its double-edged nature in an examination of its material forms and language. Margaret Smith shows how Georg Reyser followed a manuscript model for his printed edition of a Psalter, using red to articulate the text, while Koberger designed the same complex text using only black. She compares the design of the two editions, arguing that they offer a case-study for an important difference between the design of the manuscript and the printed book – the use of colour. Yateendra Joshi describes the editorial and typographic guidelines for a book of tables, explaining why particular design options were selected. The guiding principles were ergonomic – to help readers find those data of interest to them. Andrew Boag exhumes a subject of contention thought dead these last ten years: his chronology delineates a sequence of significant events in the development of typographic measurement systems, and calls upon an extensive and valuable bibliography. Finally, Alan May asks a question which will have occurred to any visitor to Rome who has an interest in letters and who has observed that those on some big inscriptions were once infilled with bronze: how were they made?

The Latin-based typographic font, in its alphabetical part, took shape in the 15th–16th centuries, and has changed very little since. The standard forms of printed Cyrillic were resolved only in the 19th century – four hundred years after Western romans. Like many non-Latin alphabets, modern Cyrillic is a younger typographic script, and, like many of those scripts, it allows for a number of alternate versions of letterforms. The use of certain forms requires shaping other characters, related to them, in a similar way. A wide choice of alternates makes consistency and coordination crucial in styling Cyrillic typefaces. The correlations in letterform construction are not always the same; they are not permanently fixed. The composition of pairs and groups of letters sharing certain visual features varies widely. Those links cannot be reduced to linear connections of letters ranged in rows: they are multi-directional. They also extend beyond the limits of the Cyrillic alphabet: shapes related to certain letters may be found among numerals, or in Greek and Latin scripts. The aim of this essay is to highlight some of the special features and relationships of letterforms that are to be taken into consideration when designing Cyrillic type.

Specification has until recently defined the work of typographic designing. It has barely been written about, and this essay seeks to repair that absence. Specification emerged with the designer as a new and characteristically modern instrument’ of control over decisions which once had been made in the workplace. The difficulties to which its exercise could lead are illustrated. Specification – the means by which typographers sought to achieve ‘quality’ – is implicated in the deterioration of compositors’ work experience. But ‘de-skilling’ was more due to managerial decisions about the organization of work, which were made easier by technical changes. Specifications are objects, and they are also communicative acts, acts of language. Their language is considered for what it tells about the social practice of typographic work. While designers may instruct by commanding, they also use the less overtly manipulative linguistic act of declaring. This is because they have always relied on printers to fill the gaps in their knowledge: to secure ‘quality’, they have needed printers’ consent and co-operation. The demise of specification may lead to the de-skilling of designers: as the tools of typographic work become more sophisticated, so that work returns to a pre-modern mode, where both designing and its language become ever more private.

Margaret M. Smith:
The typography of complex texts: how an early printer eliminated the scribes’ red

Scribal conventions utilized red to articulate texts, and, for his printed edition of the Psalter of St Bruno in the late 1480s, Georg Reyser followed a manuscript model which used red in this way. Just a few years later Anton Koberger’s edition of the same text had worked out a method of conveying the same complex sets of information using only black. This paper compares the typographic design of the two editions in order to expose the changes that Koberger needed to make. It argues that these editions serve as a case study for one of the most important differences between the design of the manuscript and the printed book – the use of colour.

This article describes the editorial guidelines, typography, and layout developed for a book consisting almost entirely of tables, and explains why the particular design options were selected from a very wide range. The guiding principles were almost entirely ergonomic – the tables were laid out to make it as easy as possible for readers to scan the contents and to find those particular bits of data of interest to them. The design covers all the parts of statistical tables from table number and title, through head-notes, columnbeadings and row headings (up to four levels in each) and footnote indicators, to source notes.

The author’s main aim in this paper is to provide a clear historical sequence to what is a complex chain of events. In his introduction he explains how business imperatives have driven most attempts to reform systems of typographic measurement. He suggests that metric reform – an ISO proposal for which was developed in the 1970s – is still needed. The chronology which follows presents a sequence of significant events in the development of typographic measurement systems. The chronology makes considerable reference to an extensive bibliography: in this respect it provides a useful reference tool for future researchers and students.

Alan May:
Roman bronze inscriptional lettering: a note on methods of production

The letters on some imposing Roman inscriptions appear originally to have been infilled with gilded bronze. Just how these fills were manufactured and attached to the background stone is not known. This paper describes a trial of one possible method and speculates about others.

© 1996 Typography papers Department of Typography & Graphic Communication, and the authors 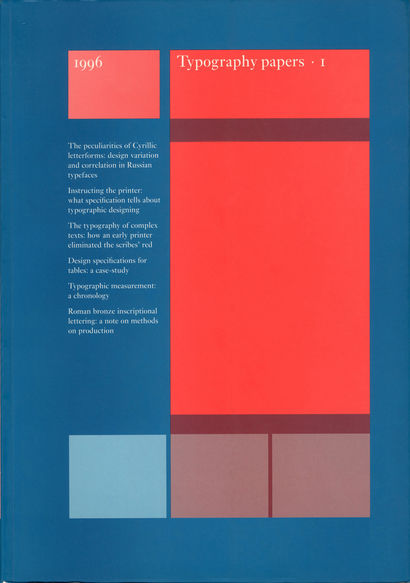 Margaret M. Smith:
The typography of complex texts: how an early printer eliminated the scribes’ red

Alan May:
Roman bronze inscriptional lettering: a note on methods of production