For this task I created a social media banner to accompany a podcast for ‘Homegoing’ by Yaa Gyasi. This illustration was one that is inspired by the book cover.

I took inspiration from the flowers going up each side of the cover. They looked like simple enough shapes to recreate and an integral part of the design which would create a good link between my social banner design and the book cover. I used the pencil tool to draw the stem and then used the circular tool to create a smooth circle. I then added many smaller circles around the edge and merged the shapes together. This allowed me to create the cloud-like effect of the flowers. For the petals I again used the pencil tool to draw the outline and duplicated the shape for multiple petals. Once I had 1-2 different flowers I just duplicated them to give me multiple flowers across the front of the banner.

I then moved onto the background. I wanted to use the same colours as the book cover to keep them closely related but I used different shapes. I decided to use a series of wave-like shapes to create a background that was completely original.

After creating the background I added ‘Homegoing’ in the font Futura. I picked this font as it resembled the one used on the book cover but instead of red I chose black to keep it from blending into the background. This font is thick and heavy which makes the text stand out.

The task provided me with software tutorials I was able to use and watch prior to starting this task. The first tutorial I watched taught me about using the pencil tool to draw shapes and adjusting the smoothness setting to prevent getting rough lines. This is what allowed me to draw the stems of the flowers I used above. The tutorial also showed how you can edit paths you made by using the pen tool to allow you to achieve the exact shape.

The second tutorial went more in-depth about the pencil tool and shortcuts to draw straight lines. It then talked about the curvature tool where you can set anchor points a long a straight line and make it curved.

Another tutorial allowed me to learn about creating shapes and combining many smaller shapes to create a more detailed shape. This is the technique I used to create the ‘petals’ of the flowers above.

Along with these tutorials I found some of my own online that helped me better understand the tools I needed to use for this task.

Here are a few I found and used to help me with this task.

I also found some other resources online that went through creating, combining and cutting shapes to achieve the final shape I wanted. This was the main skill I needed for this task as this allowed me to create the main focus point of the banner, the flowers. It is also the skill I used to create the different coloured waves for my background.

Across the whole module I have learned a variety of new skills on multiple softwares, some of which I have never used before. I have learned the basics of After Effects to create animated text and shapes along a timeline to produce a GIF. I have developed my InDesign skills which has also helped me across other modules. I have also been able to learn more about tools in Photoshop, cutting out images cleanly and precisely, editing images, and being able to make different images work together.

I am now used to saving files in different formats that allow me to use them across different softwares. Many problems can arise from not saving files properly and using the wrong formats which prevent you from opening them in certain softwares. I have gained good experience in saving files correctly which immediately prevents problems from occurring.

For my three podcast cover designs I went for two similar designs and for my third I went down a different route. My first two I went for a calming theme so I took the route of waves and the beach. I was aiming for a soothing podcast aesthetic that looks easy to listen to. I prefer the look of my second podcast cover as I think the first one has too many clashing colours. I then for my final design tried to mimic a school book with stickers covering it. I added a book background and then edited all my pictures to have a white border to make it look like stickers have been layered on top of each other. This was meant to portray the educational and student side of the podcast. 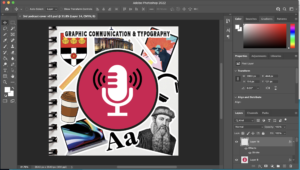 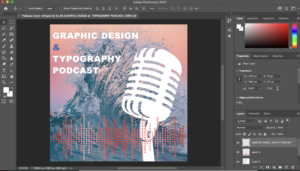 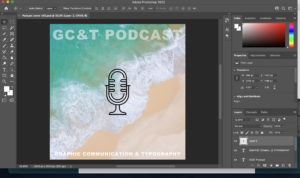 I firstly used the videos provided on blackboard to give me the basics to start this project. I then mainly used my knowledge I already had of photoshop to create my designs. I have some background using photoshop so I had a decent basic knowledge to allow me to crop and edit photos. I did search up and watch a video on how to transfer images from raster to vector images. This helped enhance the images that I picked out from my searching online. I want to continue to enhance my ability to edit pictures and combine images to work together perfectly. I want to increase my knowledge on the lighting and editing tools in photoshop which will help images work well together rather than look like separate images that do not belong.

This is the link to the video I used to help me convert raster images to vector images.

In terms of design resources and articles I did not go searching for any. I wanted my ideas to come from me and I wanted to test my creativity with this photoshop task to see what I could produce. I then want to build on from this using external inspiration but I believe generating my ideas alone allowed me to really see where my ability and creativity is currently at and gives me a base to start growing from.