For this task I had to design a Facebook banner to accompany a podcast called ‘Homegoing’ by Yaa Gyasi. This is my process on how I produced my final design.

From looking at the original poster for the podcast, I noticed various different features that I wanted to include in my design to keep the different mediums consistent and on brand. These specific areas I wanted to include is the use of colour, use of simple yet effective shapes, silhouettes and use of fonts.

In the original poster I observed that the rhombus shapes used formed a composition that helped with direction. Which further lead to white space for text and areas for character illustrations. I decided to use this in creating a funnel/arrow type effect to draw focus into a certain aspect. I made these shapes by using the ‘rectangle tool’ and moving 2 of the anchors. to repeat these shapes faster and more efficiently I used shortcut of ‘command + c’ and ‘option + drag’. Only using half of the required space allows room for text. 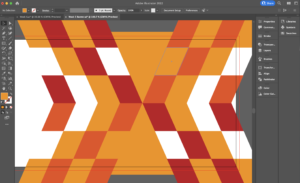 Within this area of focus I wanted to include the silhouette used in the original poster, however I believe that by not including the repeated pattern into the dress, it made the silhouette stand out more. This is because the overall design is far less crowded and easier to intemperate. I utilised the pen tool drawing out the outline whilst holding the ‘shift’ key to ensure smooth lines. 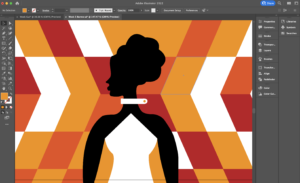 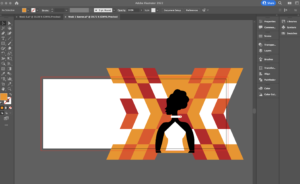 The chose the fonts in this design and their different weights to emphasise the title, author and quote. This was highlighted even further by separating via the use of the same colours within the rhombus pattern. 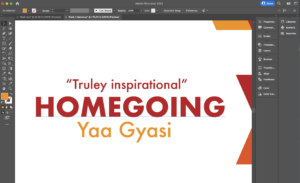 Because I was not very confident in using illustrator and more specifically utilising the pen tool (which from using it in this task and practicing with it have noticed it is an extremely vital tool within Illustrators armoury) I mainly used tutorials focussed on this. I used the pen tool heavily for the silhouette and for the buds in the bottom left. I then utilised tutorials around creating and manipulating shapes, which is how I created the the rhombus shapes. Below are the links to the tutorials:

Because this was the first time I have looked into banners in detail and designing banners I started off before putting ‘pen to paper’ by looking at existing banners to gain some inspiration on the use of colours, compositions, effective fonts, use of images (in this case illustrations) and the use of shapes. I found this information on Facebook itself and Pinterest.

I wanted to use this module to test me abilities by going out of my comfort zone through using software that I am not as confident in, Illustrator is being one of them. This is because I struggled to get my head around creating smooth curves utilising anchors, paths and handles. Once practicing with the pen tool in this module I familiarised myself with these aspects and became a lot more confident in drawing with vectors. I found that I became more efficient in using the tools as well, producing work a lot quicker than I did before.