My chosen discussion task will be formatting a flyer in InDesign. This was the task I struggled with the most, but also, I think, benefited from the most.

Although I do have experience with formatting text in InDesign, it is something I find difficult, so I wanted to explore this task fully so that I could build up this skill a little more, as I believe it is an important one to have as a designer, especially as a designer interested primarily in typographic design.

Initially for my design I wanted to create something that mirrored the aesthetic of other promotion used for the podcast. After looking at the podcast website, as well as the promotional material online, I came up with a first design idea.

I wanted to keep a similar colour scheme, yellow and blue, to match the official promotional material, as well as some of the key imagery. One design in particular caught my eye, which was one featuring a silhouette of a head with the title “rethink’ where the brain would be.

I used this as inspiration, creating a forward-facing silhouette in blue with an open eye in yellow. While experimenting with this, I decided that I simply didn’t like how the shapes and colours worked together and decided to move on to a second idea. This time I planned to use a different silhouette, more like the one in my original inspiration. Again,  although I had used a similar design, I found it looked slightly wrong, and decided it would be best to move away from this idea.

Eventually I settled on a new, somewhat simpler idea, using an image of the presenter, still using the gradient blue hues I liked originally, and combining two fonts that I felt worked well with the tone and image. 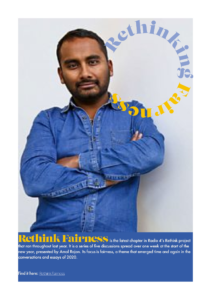 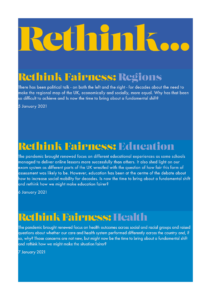 Although I already knew the basics of formatting text in InDesign, it was definitely helpful to have access to and have the opportunity to find tutorials to make the process more simple and more effective.

Looking at the tutorials for formatting text to refresh my knowledge really helped me get a better understanding of how I might bring my knowledge of formatting text for book design into formatting text and image for a flyer or magazine. Although the two processes were somewhat different, with the help of the provided tutorials I was able to use a combination of fonts, weights and sizes relatively easily in the setting of a flyer alongside image.

While I have never had experience with using hyperlinks in text before, I found it to be easy to understand and incredibly useful for other projects, especially for its usefulness in designing for screen or in web design. I also found it useful to be able to format a hyperlink directly into text without disturbing the layout and being able to apply paragraph styles to it.

I was unsure how to use certain text formats that I wanted to try, so I looked at some simple software tutorials to help me further my understanding. I wanted to learn how to type around an ellipse, so I looked at some software tutorials that advised on how to  type around a pre drawn shape or line. This tutorial (https://www.youtube.com/watch?v=6SU8FwJhNiQ) on creating text along a path. This was a simple tutorial, but I feel it will be incredibly useful in the future with other projects.

I would like to further develop my skills in using typography on indesign following along with the more complex provided tutorials.

When beginning research for this task I wanted to consider first what the current promotional material for this podcast might look like, and how I could incorporate that into my design.  I went to the page for the podcast itself, noting colour scheme, font, image and layout. Again, this was a combination of blue and yellow colours, which I really liked and tried my best to incorporate into my final design, specifically keeping the blue gradient colours, matching them to the image used, in complementary contrast with the orange/yellow tone for some of the headers, and an off white for the main body.

Once I had landed on my third and final design idea in the process, I wanted to do some research outside of the provided software tutorials and design tips on how flyers and magazines are designed. I first looked at some sites on magazine design, such as this one (https://yesimadesigner.com/anatomy-of-a-magazine-layout/). I also looked at Pinterest for inspiration and ideas surrounding magazine, leaflet or flyer design. I decided I liked the use of a large image with an abstract shape being used for the title text, with the key text around or underneath. I also liked abstract, bold fonts in combination with simple, clean ones, using bold colour combinations to create a contemporary yet welcoming effect that draws the eye.

I looked at further image and design for media collections for inspiration, this time specifically centred around podcast or video promotion or informational design. Again, these often use an eye-catching logo or the presenter or creator in an image to draw attention, using large or bright yet simple lettering and phrases combined with smaller, slightly less visible from afar text to draw the audience into reading further about the media. I attempted to achieve a similar technique through my design, while trying to maintain a simple decorative aspect.