Our task was to use photoshop to make some creative images that would develop our skills with the software.

When looking at existing creative images they often reminded me of dramatic scenes from books or movies, I thought I would draw on this for my inspiration. For this piece I wanted to create something that would remind me of my book collection, I looked at other creative images with a story and found those with a fantasy atmosphere were the most interesting. The idea of castles, magic and battles was a highly enticing one.

I wanted to create an image of a woman running through a castle and then having some kind of suggestion of magic in the image. I had to find some photos that fitted with this idea. I found some images in and around castles and settled on a shot of a dramatic staircase with some detailed architecture, it has some intense warm lighting that I could emphasise even further by altering the colours of the piece. My next task was to find a subject, I wanted a powerful image that had some form of symbolic suggestion to it. I also wanted the colours to match nicely with the image, I had tried previously and found that when a subject has massively contrasting clothing to the room they in no matter how many alterations you make it still won’t look right. Even if the image was authentic it still would lack a certain pleasing visual nature I therefore went for someone with a red dress and a lantern whose light I could change to be more warming and fit with the rest of the scene. I wasn’t trying to simply cut out a person and put them in another setting I wanted to create an entire piece and for this there had to be a story.

For the narrative of this image I wanted to go with magic and power of some kind, my initial idea was to have a large sword and to make it appear as though flames or magic was erupting from it, however when I found my image the sword wasn’t the centre piece of the subject so instead I grew this power from the lantern she is holding. 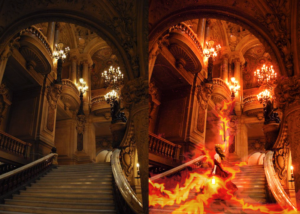 Tutorials and how I used them
In order to create the image that I wanted I had to find some tutorials that would help me produce flames or magic artificially in my work. When doing this research I found a designer named Max Asabin, he is a Russian artist that is known for his own unique way of creating flames of magic in his work. He does this by using a gradient map and then drawing over this gradient map by hand to create the texture of whatever you want, in this case for my image I was able to create the texture of flames and because they were drawn by hand they had an organic nature to them. I had some issues with these tutorials because a lot of his work is fully in Russian and a lot of his videos don’t have translations, I did however find some other Russian artist that also speak English that have conveniently translated his personal tutorials or created their own using methods similar to his or what they learnt from him.

My first step in creating this image was to find my subject and cut her out from her original scene and then place her into the stairwell, this was quite simple as I’ve practised this before on other images I did however then have to alter the lighting in her image so that it appeared that she was actually stood on that staircase rather than somewhere else. I learnt this in another tutorial that showed me how to change the lighting and the colours in order to make something look like it could belong anywhere that it was put. I did this by overlaying black and white layers and increasing the saturation to bring out the true colours. 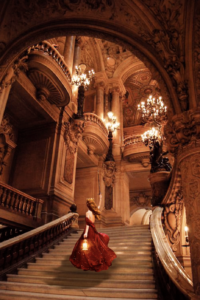 After I had made it look as though she was in the scene I drew some shadows around her to increase this realistic affect and then it was time to create the flames. I created a gradient map and then a layer mask; the gradient map that I used had all of the colours of flames. I’d use it in other images where I’d used un-natural colours that made it appear more as magic rather than fire. Using the layer mask I drew on top of this gradient map so that only the colours of the gradient matter available could determine what colour the flame would be in linking to the amount of pressure that I used with my pen. This helped to create a nice natural look for the fire and I could have it spread from the sword in the lantern anyway that I desired. The finishing touches for this piece were alterations to the saturation and lighting of the peace as a whole to give it a kind of warm and orange glow and add some clothes and dust effects to create some more depth and texture to make it look as though you are in that scene rather than viewing a picture of it. 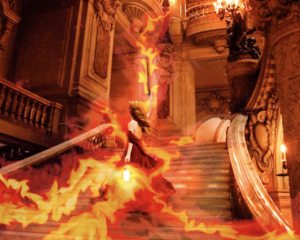 Here are the links to the tutorials that I used in order to create this image.

My inspiration for this piece came from the things around me in the form of fantasy books films and posters, it’s quite a common thing for fans of books or films to create their own artwork around it and it’s quite common for me to see Photoshop manipulations that involve magic or some kind of mystical world. I’ve looked at a few images that included this and I really liked how they looked and I wanted to be able to replicate it myself. 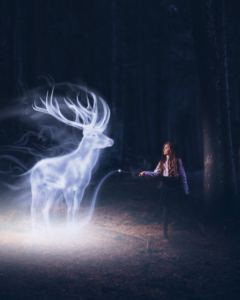 This first image accurately displays what I was talking about, this fan made magical image using photoshop to make it look as though someone is appearing in a fictional world. I really love this and as someone who is a fan of fiction I felt that this topic was close to my heart. This particular image is brilliant and really stands out because there is such a detail to the drawing of the Petronas, it’s difficult for you to see that that would be something made by a fan rather than a professional I wanted to replicate this kind of magical lightning atmosphere within my work and the piece that I created. 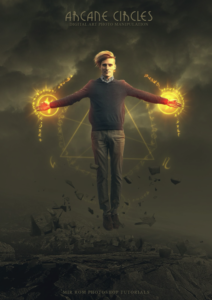 This next images are quite clear separation between what is real and what isn’t. The man creating the magic symbols is an ordinary one and dressed in everyday clothes. However the effects around him help to enhance the narrative of the scene here, I really like the high intensity of the colours the oranges and yellows help draw your eye strongly to the piece and really help to add that sense of fantasy and magic. 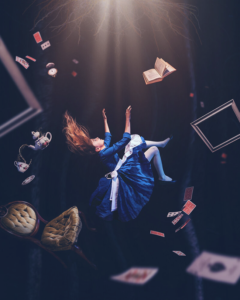 For this third image I really liked how clearly all of the objects are put into this scene there obviously all taken from different angles on different objects maybe with green screens behind them but I really like how realistic the falling looks. I want to be able to adopt skills like this in my work and to be able to take someone from a fantasy setting into a real building or room whilst maintaining that sense of realism so it looks as though someone is actually performing those acts of magic.