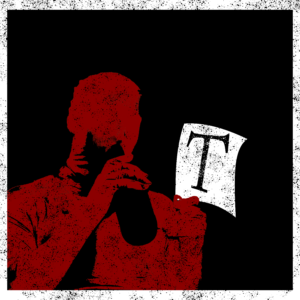 1.For my first design I used my own photography to create the illusion of a podcaster holding a mic and a sheet of paper with a serifed T. This is mainly a photographic design with vibrant contrasts between red , black and white in order to catch eyes of the audience, this is in the vain of the classic Apple iPod ads . I used a splatter brush to create a diesel bed effect as if the designs were old and from that era close to 19 years ago. the central theme here is of the Podcaster more than the typography itself, an element I wished to revolve in my second design . To remove colour from the figure I selected half the image, and removed it using the lasso tool, the other half I copied to a new layer and fully painted it, then with the areas removed, the black background seeps through . To create the paper , I used a white square and warped it using the transform tool so it is not a static object . The letter T also had to be rasterised and turned into an object so that it could also be warped to match the flow of
the papers movement

2.In the second design, I wanted something vasty different from the previous photographic one. Therefore this one is almost entirely typographic with vibrant contrast for a background. The large serif , TGC stands for Typographic and Graphic Communication, and the theme of the podcast. It is underlined with a large , thick block, a characteristic known to be seen in 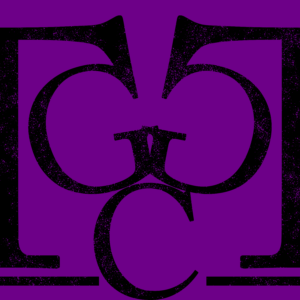 modernist design that are seen in modernist designs that are keen on geometric shapes. The splatter patter I reused once again here to add texture to the cover that aesthetically looked a little basic for my aesthetic pleasure , despite the intention being that of a minimalist design. the T and G reflect each other as Type and Graphics are everywhere, yet one C as Communications is a singular concept built of components . Furthermore, if that was mirrored there could be a misconception that it is an O and not two C’s 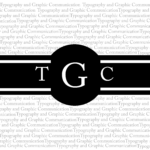 3. In the final design, I wanted the theme of Type to be centre stage and have a more complex maturity to it . I used black and white as the 2 main tones compliment each other well and very different from the other 2 designs featuring vibrant colours. Once again I embraced the geometrical blocks in the centre of the Podcast cover. The upper and lower half of the design are also made out of rectangles for a modernist style, with the exception of the use of serifs. The text is white to contrast with the black rectangle and have a consistency with the white background. The G for Graphics is the main focus point of the design, the largest letter, evenly sowed between the T and C. This section of the black block expands out created by ad

ding a circle over the top of the rectangle in a matching colour, and merging the layers. The white back. At this stage the white background was looking a little bland, therefore , to add to the typographic style, I typed repeatedly , Typography and Graphic Design. The opacity was reduced to under 60 % in order to not distract from the sharp white tone. This adds texture to the image through multiple layers, such as the subject matter has. This is an almost entirely typographic design. The upper block of text was duplicated into the bottom one and is my favourite of the 3 designs.

Fortunately due to my prior experiences , I am very familiar with photoshop and its tools so I did nit need to learn how to use it from scratch. However, by completing this task and watching the software tutorials it was a helpful refresher of skills and did teach me new things. One tutorial I watched was on how to decrease the opacity of an item,’How to change the opacity of an image in Photoshop CS6, so that it could be seen through(https://www.youtube.com/watch?v=bW5z39Pxdmw). I used this on the background text for my final black and white design to add texture. The first tutorial I watched showed how to decrease opacity for a whole layer. Therefore, I duplicated the text to a new layer, transformed it into an image. This way all the text could be moved at one time in a block, and therefore, any changes ,Ade, such as adjusting the opacity , will affect all the text. Although the second tutorial I watched, ‘Transparent text effect'(https://www.youtube.com/watch?v=bG5r5TM5e2o), did not display exactly what I wanted in its instruction, the method could still be applied to my own work when adapted, which I did by editing text transparency .I also learnt from ‘Matthew Prices: how to design a podcast cover- the ultimate guide’. This taught me many important elements and factors that must be known upon designing a podcast cover including the dimensions. These being a minimum of 1400×1400 pixels and a maximum of 3000×3000 pixels which is 72 dpi in a PNG or JPEG format. It also provided useful information like to consider where the cover would be seen and therefore consider its style of cover. For example, if it is seen somewhere printed like a magazine and not digitally like Spotify , it may need to be obvious it is a podcast cover and include a mic or an element recognised with such.If it is removed from its original environment it must be still be obvious that its a podcast over out of context. I also viewed, ‘How Amy Elshamy created Round things’. However, it did not teach anything that I wished to include for didn’t already know, yet it was still an interesting watch.

In my initial design , a major inspiration were the original iPod classic adverts from 2001 (https://www.theverge.com/2016/4/1/11340526/ipod-commercial-throwback-songs-apple-anniversary). Although I changed many of the key elements of these posters, thy were very basic and effective. They use a bright and colourful neon background which would contrast with  a silhouetted figure dancing in the foreground. There were no textures to them but where clear in their goal and what they were selling .I Felt it was too basic and applied more texture by removing parts of shaded body. This is to create the effect that the podcast over was released at the same time as the iPod adverts nearly 20 years ago, it may decay on paper as its old. The apple iPod adverts also had an influence in the second design with its vibrant background. I experimented making it red and purple, finally settling on the former to further distance from the first design featuring many red elements. For further inspiration I simply browsed podcasts on Spotify, this time focussing on typographic designs , one of which caught my eye being the Anfield Wrap using just the first letters of every word, shortening it to TAW. This also has a distressed look. The simplistic withered look I wished to emulate in my design and is a highly effective, eye catching image. However, it doesn’t not reflect the subject matter very well, having little to do with Liverpool football club.A huge inspiration for my final design is the clothing brand Emporio Armani, the logo is always very geometric and always black and white. The logo is sometimes just typographic and features the spread of an eagle covering a large space. The geometric nature with sharp black and white themes , I recreated in my own design as a vastly different alternate to my former podcast covers