I started my design process by looking at some existing examples of podcast covers. The covers I looked at had some noticeable themes that I intended to replicate. A fair few (The Joe Rogan Experience) featured a microphone in the cover so that was something interesting I wanted to explore. A lot also made use of an image of the podcast host (like the dropout and Joe Rogan examples) while others just had the podcast name displayed in a creative way (Like the buzz cast). 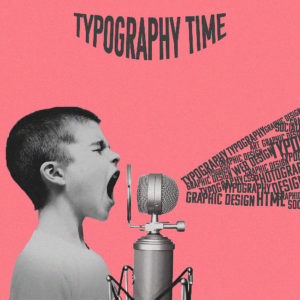 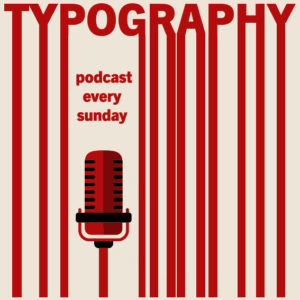 As I’d seen in my research, many podcasts covers incorporated the microphone so that’s where I started. I had this idea of someone talking into the microphone one end and out the other end there would spew subject specific vocabulary so from looking at the cover you could immediately tell what kind of topics would be discussed on the podcast. I also chose a catchy name for the podcast, ‘typography time.’ I enjoyed creating this idea and like the outcome, I think the cover incorporates typography well which reflects what the podcast is about.

For my second design I wanted to explore creative ways I could display the podcast name (like the buzz cast example). I started by choosing a tasteful colour scheme and a simple name. I then stretched the letters stems to create a striking linear pattern.  I then filled the gaps with the typical imagery you would see on a podcast cover (microphone and information). I experimented with this design by warping the lines to try and replicate sound waves emitting from the microphone but I decided to stick with the more simple idea. 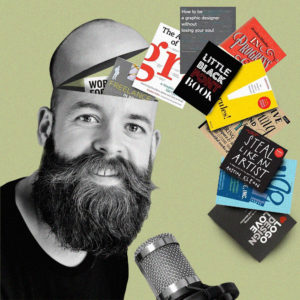 For my final design I wanted to create something that incorporated as many of the archetypal qualities I had seen in my research. I thought an image of the host on the cover would make quite a convincing design however a problem I faced was that it was a made-up podcast with no actual host. I decided to just use stock images, one featured a man, the other featured a microphone, I then applied a black and white filter to both to keep the image consistent. Similar to my first idea I wanted to communicate what the podcast was about so I had this idea of a thought bubble coming from the hosts head which would have all the topics he would talk about in it. In the end I went with the idea of having books about graphic design and typography (that he might discuss on the podcast) flowing out of his head, as if all his knowledge is on display.

I started by removing the top half of his head and applied it at an angle to appear as if it was being opened. After that I found some of the best graphic design books and arranged them flowing out of his skull. I added shadow to the hosts head and to the books to give the image some depth. I did this by using tools like the drop shadow, curves adjustment layers and also just blending with the black paintbrush. I like this idea because It combines what I learnt from looking at existing podcast covers and overall looks quite convincing.

I started by watching some of the official Photoshop tutorials. I watched a lot of the videos from the ‘working with layers’ link. This was very helpful as often my Photoshop layers get a little bit messy and this told me the importance of creating a Photoshop file that looks professional with correctly named layers. I did some further research into layers with just some basic google searches and discovered you can group layers when necessary which made a lot of this project more organised and effective. I also viewed the website ‘how to design a podcast cover’. This was really helpful as before I had a look through the website I had no idea how I was going to start with my designs but the website gave me some direction and discussed some good starting points and also some questions to ask yourself as you go through the design process. As I was working on Photoshop I had an issue where my images looked very flat on the background and I was not sure how to make layers look more natural and blend into the surroundings when on a page. A YouTube video called ‘Master Curves from Start to Finish in Photoshop’ really helped me out. I discovered you could use the curves adjustment layers to give an image darker tones and lighter tones in the appropriate places. This includes giving object shadows and highlights to make it look more natural. The curves adjustment layer also has a function where you can colour match two objects which will come in extremely useful. Skills I would like to develop in the future include mastering the pen tool as currently I am hopeless at using it. I would also like to improve at simple jobs like creating clean and crisp layer masks because currently when I cut out an image it takes ages and looks a bit dodgy.

Like i mentioned at the beginning, I started this project by looking for some inspiration and a great way to do this is by looking at existing designs. I started by googling ‘podcast covers’ which showed hundreds of results however each one incorporated some of the basic archetypes. To list a few: Vibrant colours, use of illustration, interesting typeface, experimental use of type, most of them reflect what they are about visually, use of a microphone, visuals that reflect radio or sound in some ways, most feature the hosts face. It would be difficult to include all of these stereotypes into one cover so I cherry picked 3 features that I wanted to include in my ideas.  1. have a microphone, 2. be experimental with the type, and 3. feature the podcast host. I also had a scroll through spotifiy to look at what the most successful podcasts had done on their covers (https://open.spotify.com/genre/podcast-charts-body). Like I also said earlier I found the ‘how to design a podcast cover’ website extremely useful (https://99designs.co.uk/blog/design-other/how-to-design-a-podcast-cover-the-ultimate-guide/) which addressed how to start a design and also went into detail about picking a theme and running with it. As I was designing I had this website up in  another tab just to refer back to and I feel like I was successful in following a lot of the instructions. For example it spoke a lot about picking a theme and colour and being consistent with those choices throughout, I’d like to think my covers have a solid style and a tasteful colour pallet. Topics I would like to explore further include colour theory, I’d love to learn about what colours work best together, combinations to avoid and also how colour can have an effect on the viewer. I’d also like to learn more

A source that was essential for this project was Unsplash, (https://unsplash.com/images/stock). It provided me with a lot of the images I used throughout which were all very high quality and just made everything so much easier.