For this task, the design was supposed to relate to typography and graphic communication. I first decided to name it ‘History of Typography’, because giving a name to the podcast can make my design direction more specific.  ‘History of Typography’, the word history means the past and the story of old-time. I wanted to design each of the covers for a particular period, for example, the first one as the 1970s edition and the next one be the 1960s edition. To make the design feels like its responding year period, I searched for their own represented era as the design theme. 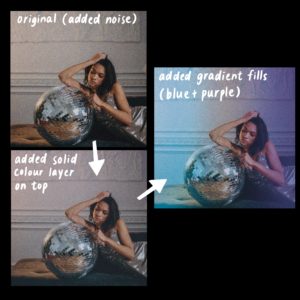 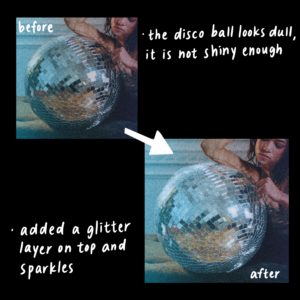 My first design idea came from the word, ‘disco 70s’. Mirror balls are one of the iconic elements in this disco era, so I used a picture of a woman lying on the mirror ball to give out this similar sensation. The original picture was in a brownish warm colour tone, I increased the noise level to add more texture to the image. To create the dreamy fantasy look, I changed the gradient fills into blue and purple. I also wanted the audience’s attention to go to the mirror ball rather than the woman next to it. In this case, I needed to emphasise the existence of the ball, so I added a glitter image on top of that area and blended it in the colour dodge mode. A soft paintbrush was then used to add white dots to make those sparkles more noticeable. In this version, I did not do much to the typography, I just simply turned on the drop shadow and the inner glow effect to make it look much more three-dimensional. 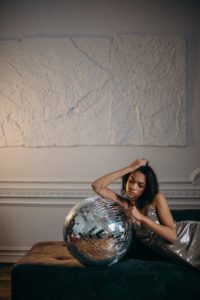 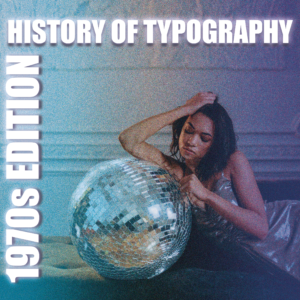 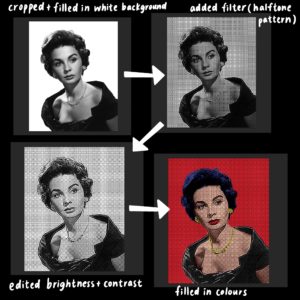 Pop art was first introduced during the 1950s, it went viral onwards. Comic style, dots were the key features, so I decided to apply these effects to my second design. I first cropped the woman out and change the background to full white. After that, I applied the halftone pattern with dot size 3. I increased the brightness and shadow level to create a much stronger contrast. I also changed the background to red and filled in the colour of the character in a comic style. 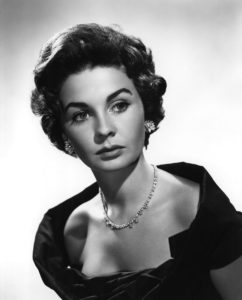 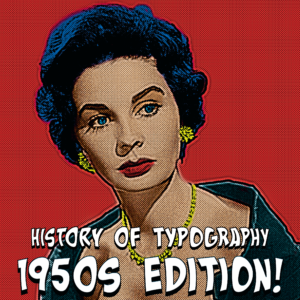 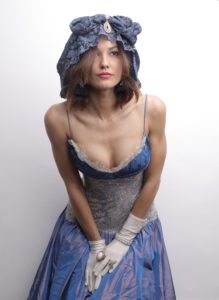 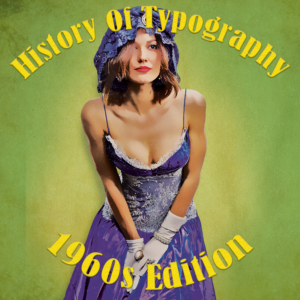 The last one was designed for the 1960s. I tried to make the picture look like an actual oil-painting by editing its contrast level and setting different blending modes like dissolve or multiply. I also added a mask on top to create the light and shadow parts. For the colour adjustment, I increased the hue and saturation to the point that the image looks vibrant enough. 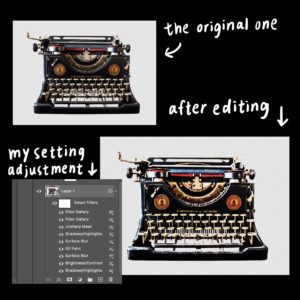 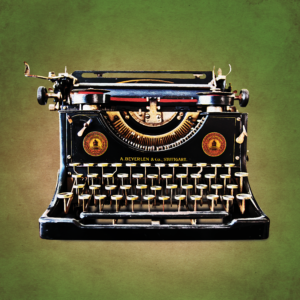 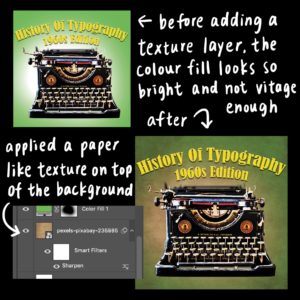 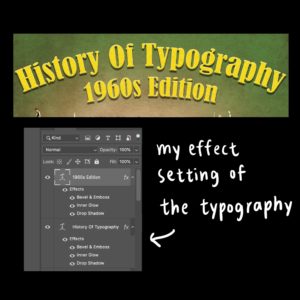 These designs came out great but the choice of imagery was not appropriate to the topic, which made the whole design not relevant to what I was supposed to achieve. As a result, I started to think about changing the image to another choice that would fit better with typography. I was searching for something vintage and representable to the theme at the same time. Finally, I decided to use a typewriter and applied the same effect on it as my last design.

For the whole task, I watched six different videos online. The most memorable one was what I watched for my last design. It was about creating a retro imagery style. One of the reasons that made this video especially unforgettable to me was because I reviewed it at least ten times. As a Photoshop beginner, it was really hard to follow his instructions when he only used short-cuts to control, so I had to pause after every step he made. In the video, he taught me to use the filter gallery from the effect panel, and the filter gallery can only be available in RGB mode, but my design task was in CMYK, so I needed to use an alternative way to achieve a similar result. Instead of applying a filter gallery to the picture, I edited the levels of the image and also extra blurred the picture to make it look more like an oil painting. Even though the outcome looked a bit different from the video, I think it still presented the retro atmosphere in the design.

Another video resource I used was about making pop art. This one was not that difficult as the previous one. Having my last time experience of struggling between the RGB and CMYK mode, this time I started editing directly on the original picture rather than placing and edit the image on the CMYK preset. For this tutorial, it was much easier to follow because those short-cuts were clearly shown on the subtitle. This effect also required me to use the filter gallery, but with a different filter pattern, called the halftone pattern.

These two videos helped me to learn using different editing functions in Photoshop and guided me to explore how powerful it can be. I had no idea about this software before, but now I can do a few interesting photo editing after watching those tutorial videos. In the future, I would like to learn more about how to edit pictures apart from using filters, such as combining pictures by cropping or blending them.

Before having the whole idea of what to create, I had a look at a bunch of existing podcast covers from the internet. I found out that most of them are simply an image and the podcast title. Instead of using or combining many pictures, they only have one focused imagery. Therefore, I mainly used one individual image in each of my designs. At first, I wanted to refer my design to some old podcast covers, but it was hard to find them because people before did not use podcast covers at all, they usually advertised the podcast by posters or leaflets.

In this task, I aimed to create designs in a vintage or retro style to relate to my podcast title. I compared the difference between a modern design and a ‘traditional’ one. It is common to see that nowadays podcast covers tend to have a simple and basic layout, meanwhile, texture or extra decoration is generally used in vintage design. Typography wise, I used serif fonts instead of a san serif, as it gave out an old style. A serif at the end of each typeface can also have a decorative purpose which made the font look much more fancy and elegant.

I also got inspiration from a 20th-century artist, called Earl Moran. His artworks were mostly pin-up paintings and they really gave out a vintage style. Pin-up art was first introduced as attractive pictures to men back then, so nearly all pin-up art had women to be the painting subject. Unlike any other art, pin-up art tends not to focus on the background of the painting. They might just leave it blank or using a few colours to create shades as the background. Therefore, when I was designing my cover, I did not add any fancy stuff at the back, instead, I paid more attention to edit the imagery.

Lastly, Photoshop still has many functions that I have not yet explored but I am really willing to know more about it. In my opinion, learning Adobe software is just like mining, the deeper I dig in or investigate, the more and precious skills I can learn from it.