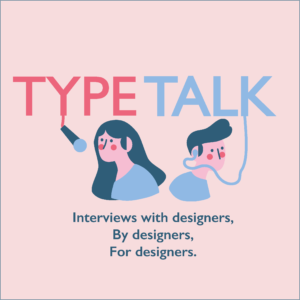 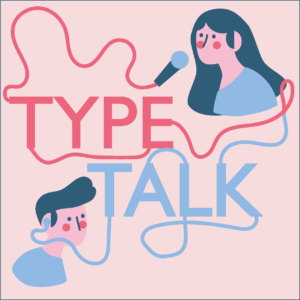 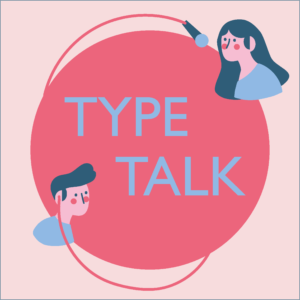 My design ideas stemmed from the idea of using illustration. I really enjoy simple illustration, and thought that it could be used  well to create a neat, clean podcast cover. I knew I wanted to use the idea of interviewing designers from looking at some design podcasts on Spotify, which provided commentary on design, or interviews with designers about their work. From there I developed the phrase ‘type talk’, as well as the idea of having a simple design to show that concept. I think illustrations work best when kept to a limited colour palette, so I decided to work with a mix of both cool and warm tones that complemented well. This way I could keep the design simple and aesthetically pleasing, while communicating the theme of the podcast. In the actual drawing process I used my Wacom drawing tablet, and the photoshop basic brush presets, the hard round brush, on full hardness and 10% softness. This gave me clear lines, while keeping a rounded edge. I drew some little character busts in my own illustration style, with simple features and colours. The idea was to have one speaking into a microphone, as if recording the podcast, and another listening. My three ideas for this project were playing with the layout, text colour and form. I wanted to keep the idea of the two figures being linked by a wire, so in my first one I placed the figures back to back, with their wires plugged into the text. In my second I did a similar effect, with the figures at both ends of the screen. In the third I used a circle, with the text in the middle, and the wires jutting out with the characters on the circumference. In the end I used the second one, as it was my favourite of the three visually, and I felt was the most eye catching and original.

As I am relatively competent with photoshop as a design and illustration medium, I mostly knew how to go about creating me design, but the tutorials provided by Rachel were still very helpful, especially the video by Terry White on youtube (https://www.youtube.com/watch?v=2NrP690oqKA) . Although my initial plan was to work with illustration on photoshop, I still found videos explaining the uses of photoshop useful and helpful, such as the tutorial on embedding files in photoshop https://www.youtube.com/watch?v=8OfC9pZMJKs . I watched a few videos with tips on illustrating on photoshop, for example, Sophie Melissa on youtube has a video on her illustration process that I found helpful (https://www.youtube.com/watch?v=XYoO_u8JNCQ.), that allowed me to reflect on making a simpler design. These provided me with more knowledge about how to navigate photoshop and how to make my design cleaner and neater. Software skills wise, id like to try a more complex design perhaps, or the use of actual photos and editing them in photoshop, as this is something i’d like to become more competent in. This project provided great insight on what i would like to work on in the future regarding photoshop and developing my current skills further, and also provided me with an idea of my current competency level with illustration in photoshop, and taught me how to simplify my designs, as I often have the desire to make them complex, so it has definitely helped me with the ‘less is more’ side of design in being able to create a clean, simple design.

Most of my research was based around sketching ideas in different styles and then transferring them over to digital, however I did look at a few minimalistic illustrative images for inspiration, on pinterest and instagram. The first was Benji Nate https://www.instagram.com/benjinate/?hl=en, a favourite artist of mine who uses a style similar to my own, with pretty simplistic features that I thought might work nicely, but eventually decided didn’t quite fit the aesthetic i was attempting to achieve. Another source of inspiration was the art magazine ‘fan club’ chttps://issuu.com/fanclubnotts which uses a simple style that I really enjoy, and inspired me a little more to look at making a more simple style of my own. From this I took away some features that made the image much more clear and simple, while retaining the message of what it was supposed to represent and advertise. Looking at different artists and images really helped me develop the imagery I wanted from something i was used to and comfortable with, into a more user/audience oriented design that could be used for advertising. It also helped me develop skills I had previously struggled with through research and trial. Topics in design I might like to explore further within this project might be looking at a more photographic approach, taking my own photographs and editing them, whether they would be of typography I find, or images I take from pre made environments, or images constructed in a set to achieve a specific look. Id like to work on my photo editing and manipulation skills in the future, as that is something I am less comfortable with than illustration, and I think it would be useful to explore in my own time using some of the skills I learned in this project, and this module as a whole.