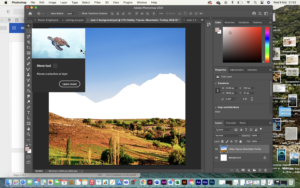 This task was asked to cut out part of the image and my original image that I have used to make this is a scenery of the mountains. I used the magnetic lasso tool to outline the part that I wanted removed and edited it out with the tools. This part may have been the most challenging and required a few trials before getting it correctly. 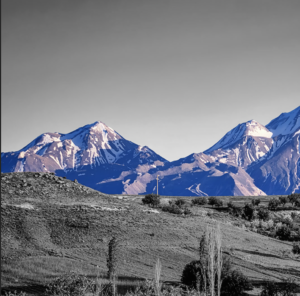 This task is where we were asked to produce part of the image into black and white. I chose to only leave the mountains in colour so that it stands out more in comparison to the rest of the image. In order to create this I used the magnetic lasso effect to chose what I did not want in black and white and added it to a new layer, to make the image black and white the tool was found in adjustments. 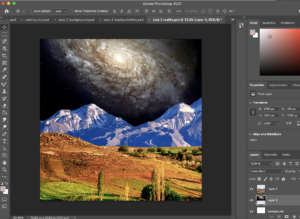 This is the task where I developed the most on photoshop. In order to create this image I cut out the background and added a new layer to remove the sky out from the image and added and image of the galaxy to replace the sky. For it to look better, I went to image and changed the brightness and contrast. For the rest of the image I used colour balance to improve the image and make it have more vibrant colours.

The software tutorials were very useful for the photoshop tasks as I have never produced either of those before so they were of great help. The first tutorial was about how to cut out part of an image from the whole image. There it showed how to use the magnetic lasso tool properly for when in need to remove some properties from the background. At first I found it quite complicated but with the use and understanding of the tutorial it made it easier for me. The second tutorial was on how to make the background black and white which was also something I had not tried as a tool before therefore it was interesting to find out how. However, I feel that I still have room for improvement for cutting out an image and could look much more accurate in some areas for the next task. The tutorials did help me learn two new skills which was very interesting.

learning across the module

In this module I have learnt several skills mostly ones using the magnetic lasso tool where I used them to cut out images and make images in black and white. These tools were found to be of great use in the tasks and for tasks to come along afterwards. Furthermore, I have never created a table using indesign before therefore this was a new skill I learnt too. One of my favourite skills during the module that I learnt to use was creating a 3 dimensional effect for my logo- initials on illustrator which was fun and fascinating to create.