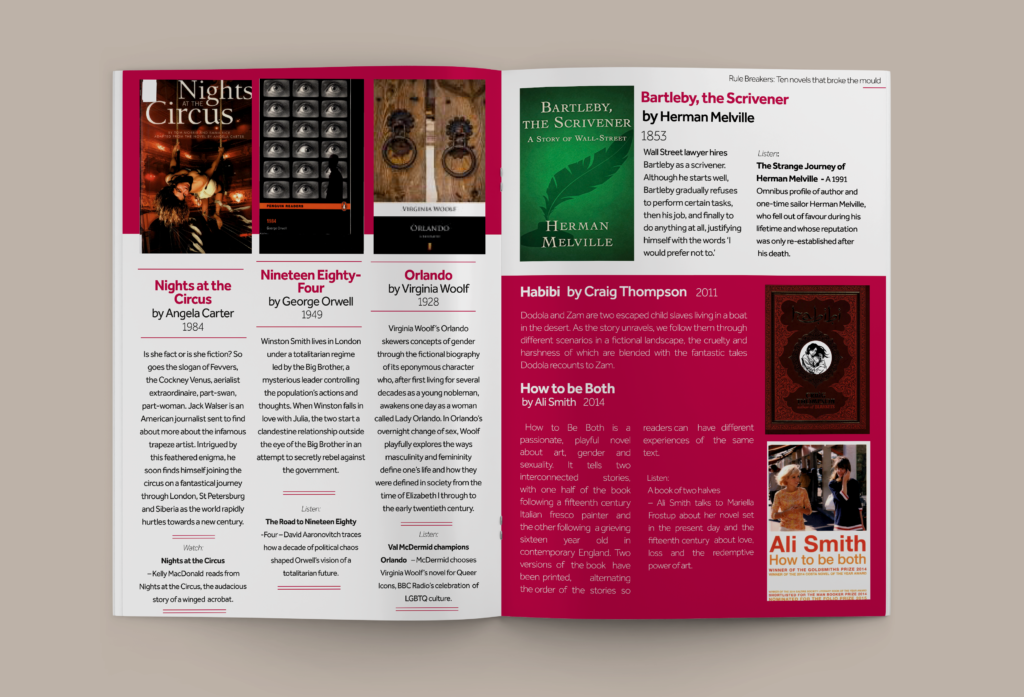 By starting off the design process of the first spread, I created a master grid system with six column that will be used within the two spreads. By setting the baseline grid, guide rules and guidelines for column and margins (see screenshot 1-3), it allow me to stick with these layout during the whole design process.

Before visualising the layout, I made use of rectangle frame tool (see screenshot 4) to orgainise the text and image , so it gain me an impression on how the final output will look like. With the typography, I have experiemented with text scale and colours to create hierarchy, leading readers to focus on the book title and image in the first piority by attracting them on the content. The title text was also in a large scale in order to create a striking effect. For the colour choices, I have chosen a simular colour palette with a combination of pink and black that have similar use in the website, which make the magazine more engaging and bright-looking (see screenshot 5 & Resources 2). 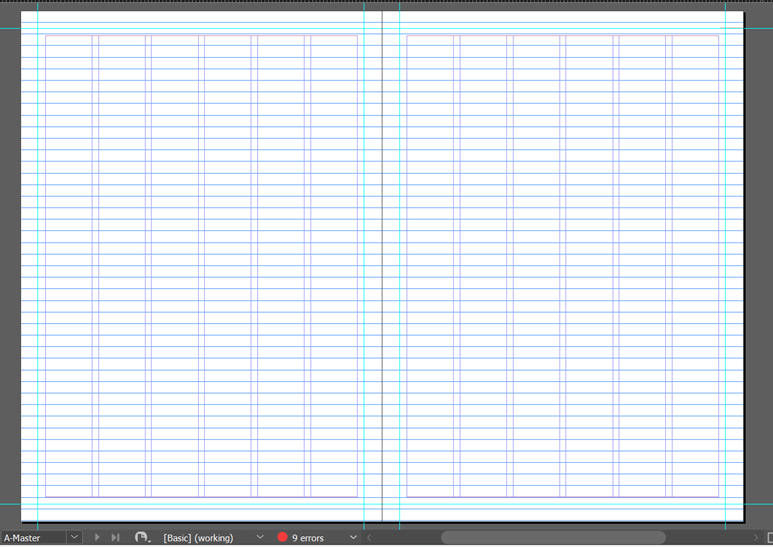 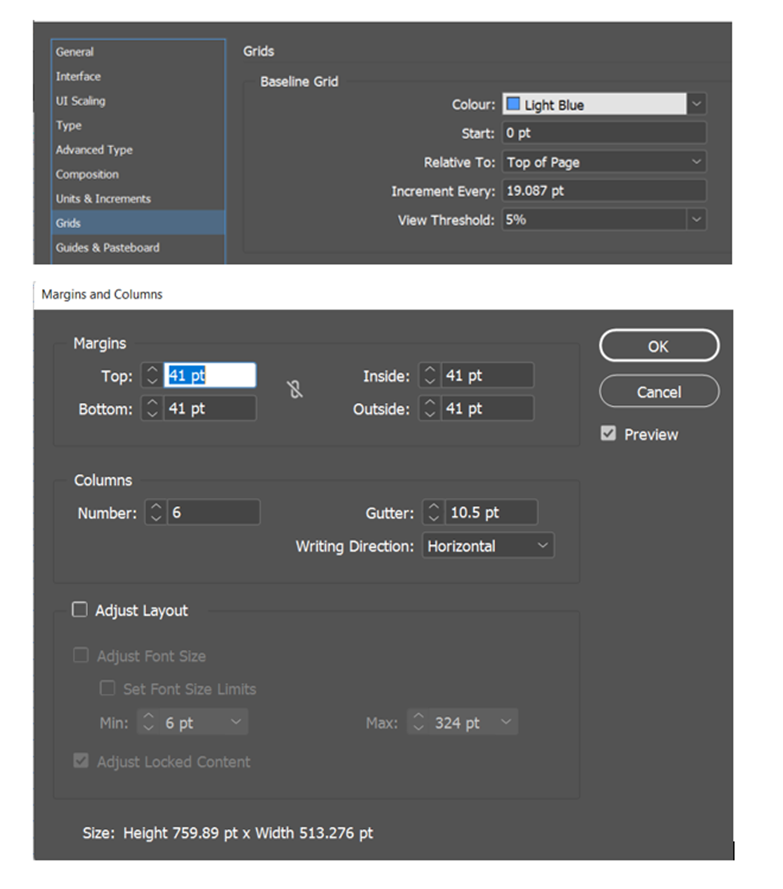 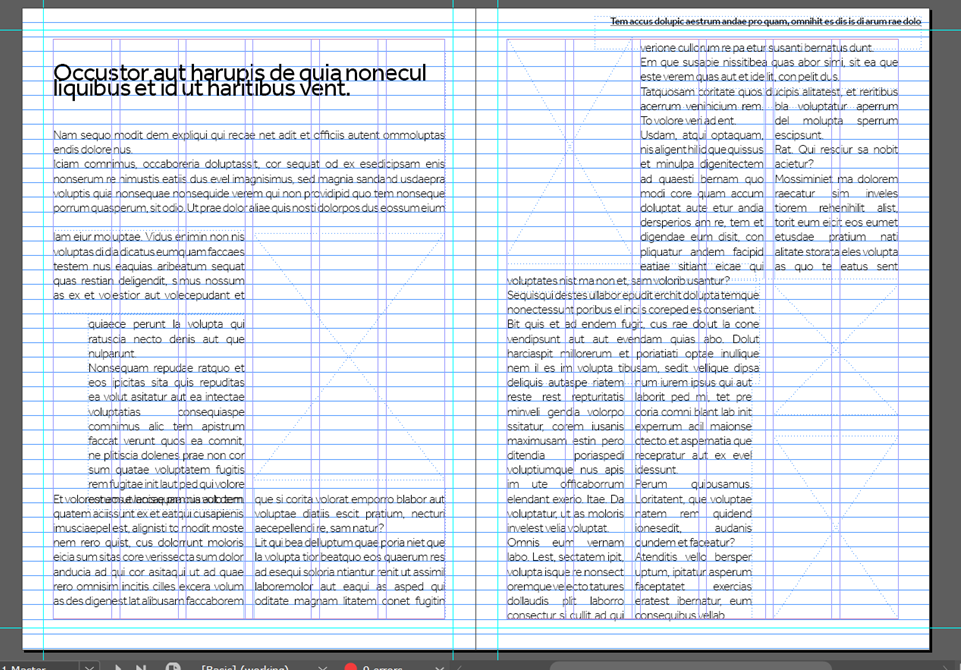 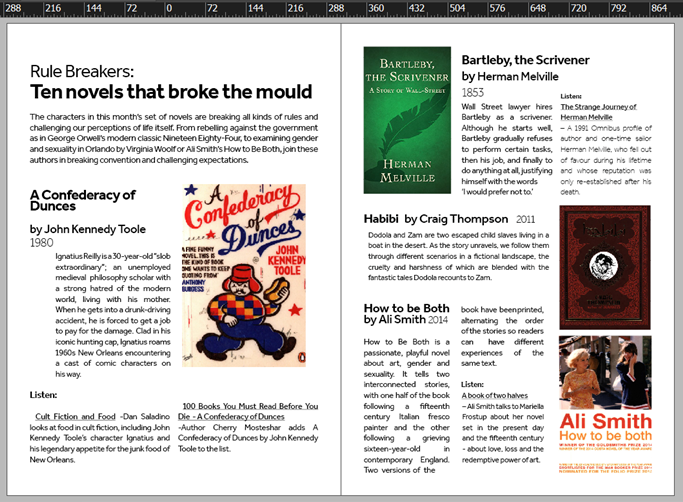 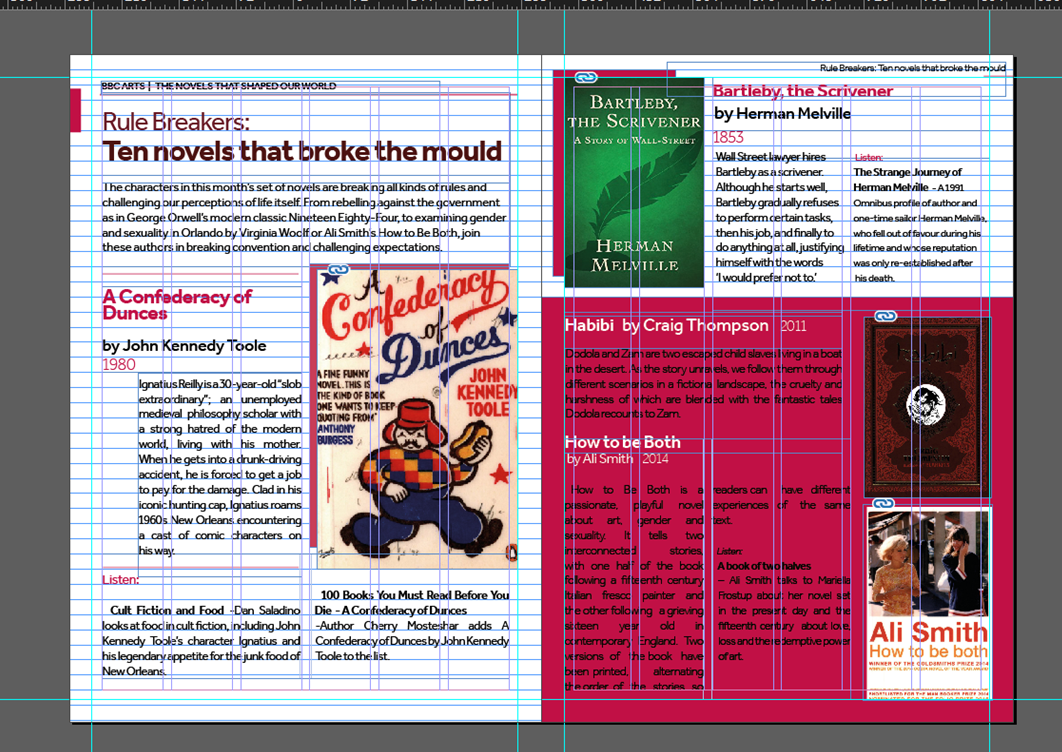 In the second spread, I adapt the same grid system to show an alternative way to layout the image and text. By seperating them into three columns (see screenshot 6-7), also experiment with text allignment such as centered text, It features each promoted book with a clear and readable description in a formal while attractive way.

I continued using different font size, as well as pink and black to create hierarchy among text. Pink rectangles are used to decorate and highlight the images of book (see screenshot 8).

At last, I futher adjust the typography by adding intent to group the text with better legibility , and end up as my final design (see Final spread 1-2) by switching pages between spreads of the second and fouth page as to prevent mountain of texts. 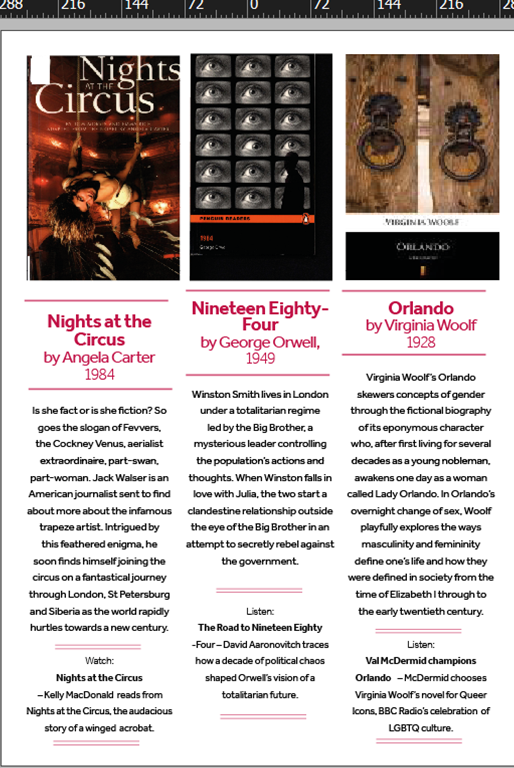 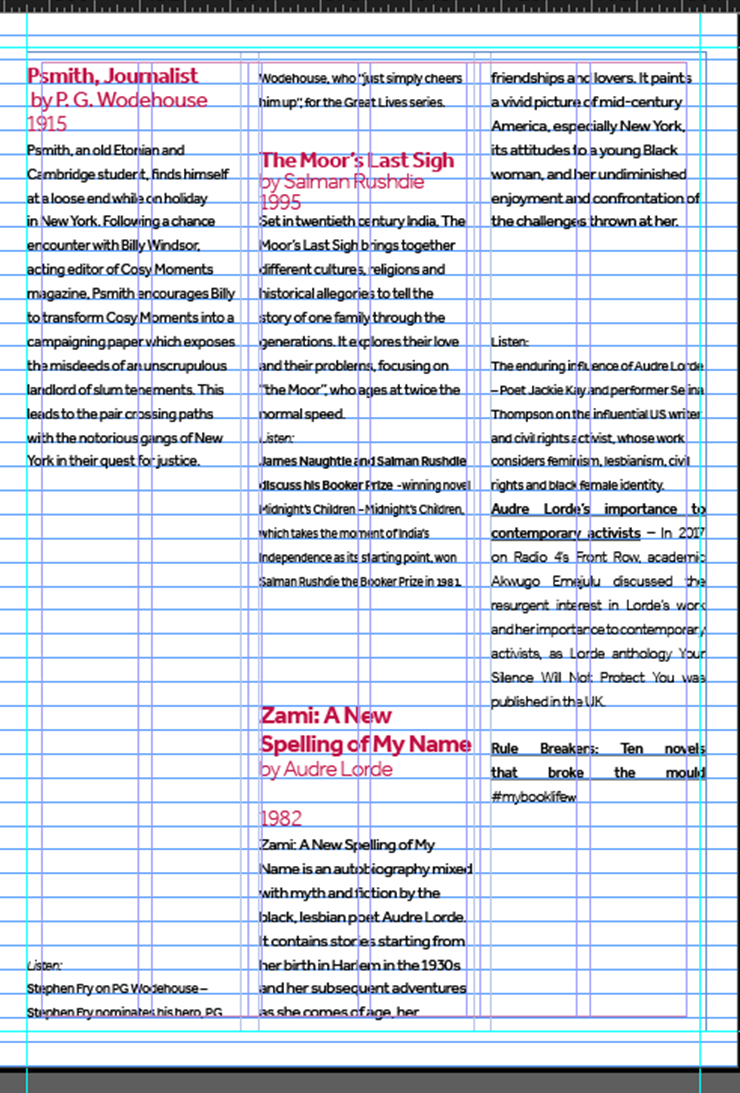 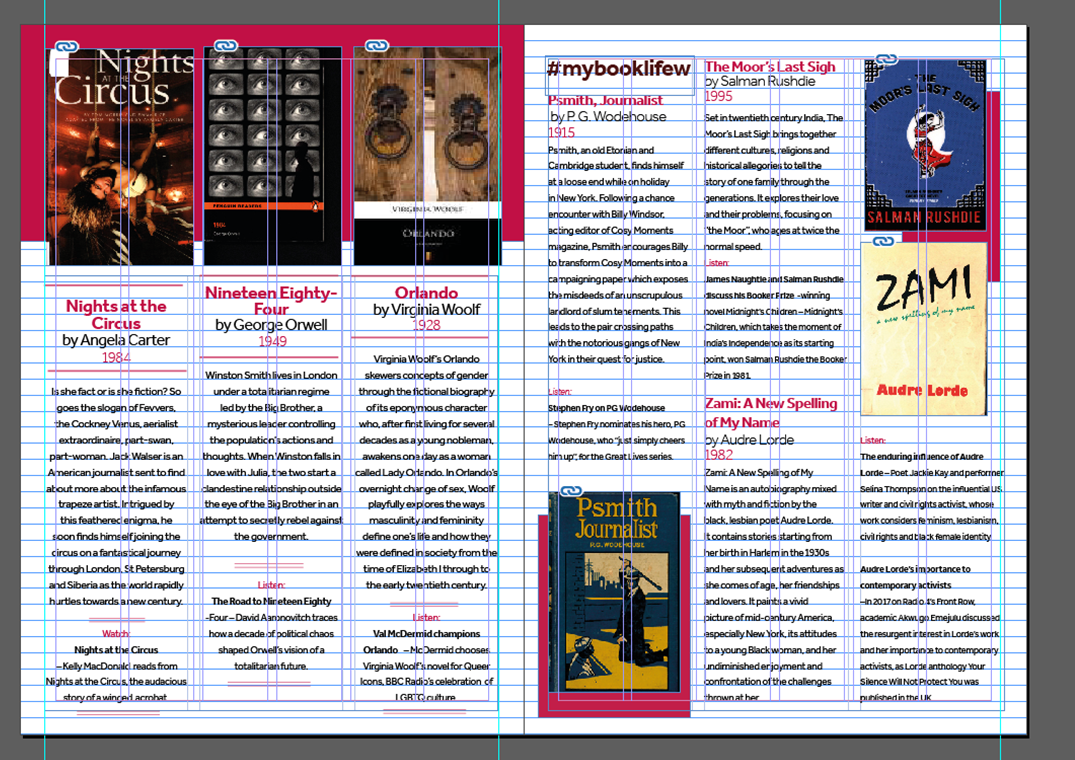 The software tutorials that I make use was mainly from Adobe website and Youtube. In previous project, I have some experiences using Indesign in struturing text by paragrapg style and master page, while lack of knowledge about structuring both image and text.

In the initial stage of struturing the text and image with layout grid, I watched Dansky and Stephen Kelman’s Youtube tutorials , which I learnt to use guidelines and rules with margin and columns setting to create a grid system and organise content properly. Stephen futher demonstrated about how to use the three column grid systems that I used to created for my magazine spread. In Adobe tutorial: Align content with guides, I then learn to use the snap to guide to easily making text allign with the grid system that I created. Another adobe tutorial about wrap text around objects, it helps me to create equal margins to seperate the image from text by using the text wrap tool.

Futhermore, The youtube streaming: Erik Kirtley streaming the design of magazine spreads was also useful on helping me with the baseline grids and guides that align the context properly. The streaming also shows tools to change colour of the image within Indesign, which I haven’t used this tool in my design but found it quite helpful in creating interesting visual effects within magazine spreads.

By planning magazine layouts, I mainly found inspiration from Pinterest, which provide loads of layout ideas with their composition of text and images. Creative market website involve professional magazines designs spread, which I was inspired by one of an example (see Resources 1) that create an effective and simple layout using basic visual elements with colour and shapes. The original website (see Resources 2) for the design task also inspired me to make uses of a simular colour pallete of pink and black.

For articles that help me across, 10 Tips for Designing High-Impact Magazines shared few tips that inspired my magazine spreads, such as tips like ‘stick with few colours to make the magazine spread looks balanced and stylish.’ and ‘A single pop of color shouts the loudest’. Some of the most effective magazine designs used color very sparingly, proving a simple pop of bold color can be more striking than a palette of rainbow brights. It encourages me to experiment with the technique sticking with two to three colour and making a poping colour to the text. 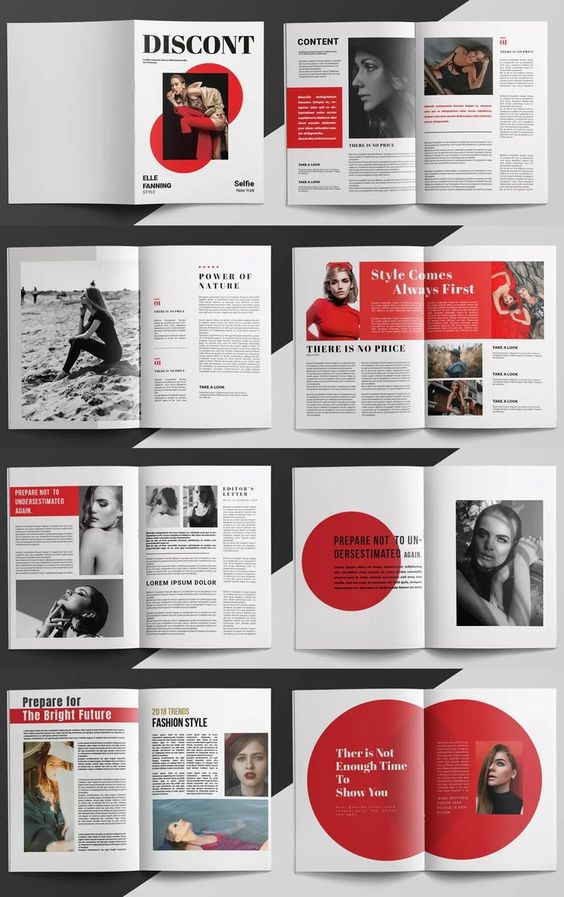 From the quiz result, I can see tiny improvement in the knowledge of the software, which reflect I still have space to improve my software skills. I have lack of knowledge about exporting image and chosing to work on a right software in some case. However, I thought I have learnt quite lots of techniques and gain some experiences with the software across the module.

In Autumn term, I mainly focus on generating ideas through task include podcast cover, postcard and stickers. As I would like to practice using in Adobe indesign in the spring term, I have spent more time and was more confident in using  adobe indesign working on timetable and magazine spreads design.

To further develop my software skill in future, I will start from using photoshop, as to improve my photography editting skills in more professional.