Type Talk. A title that’s rather straight to the point and quite representative of a podcast. The whole title “Typography and Graphic Communication” is quite the mouthful and not the most catchy for an up and coming podcast, so I decided to use something with a bit more impact– after all, that’s what design is about, right? 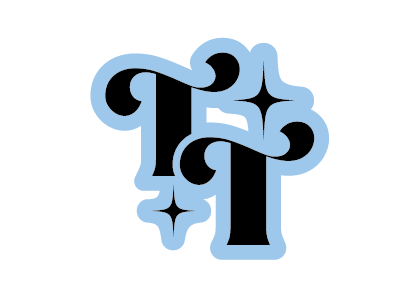 I wanted my first sticker to resemble a logo/sub mark to represent the podcast. I decided to try and achieve a clean, modern look. In order to accomplish this, I wanted the letters to come together seamlessly and in a way that looked merged, but also holds distinction between the two letters. This required me to research how to create an outline to then subtract from the other vector. I used the ‘Offset path’ function to create this outline( shown in Screen Capture (SC) 1), I learned that I could use the shape builder tool to eliminate extra parts – this made the letters look combined while allowing a breathable space between which lends a vital hand in making the sticker look clean. After creating the stars (SC 4 & 5), I then experimented with offset paths to create different coloured outlines of the stickers as a solid background (SC 6-7.1). I chose a light blue as it contrasts well with the main elements being black (SC 8). 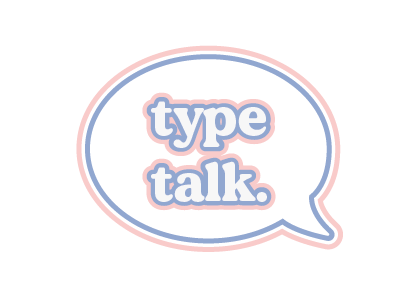 This second design focused more on developing the skills I had learned from making the first sticker, namely using the offset paths. It is much simpler than the first sticker and only makes use of a few tools in Illustrator, however it still benefits me in the sense that it helps me to practice the skills I already have which is just as important as learning new ones. I made a speech bubble using the ellipse and pen tools, then combining them using ‘unite’ from the pathfinder window (shown in SC 1); while adjusting the bezier points as I learned how to do more efficiently using shortcuts in Integrated Design Methods, I saw that the corner point of the speech bubble didn’t fit the look I was going for, so I rounded it (SC 1.1)– creating an overall softer look. I chose the font MADE Dillan, as it had a heavier weight as well as rounded serifs, which added to the soft and welcoming design I wanted (SC 2). After all the base shapes were made, I experimented with the offset path and created outlines for the text and the speech bubble, then changed the colours. I chose Pantone colours 13-1520 and 15-3919 as they compliment each other very well and are quite subdued. Choosing specific colours also helped me to learn how colour swatches in Illustrator work and how to get them (SC 3-6). 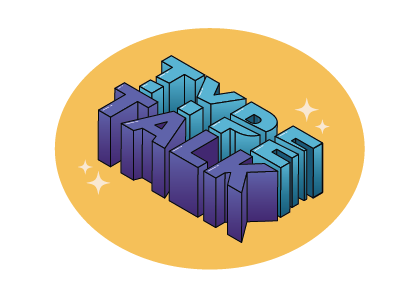 For my final design, I learned more new techniques to challenge myself. As I am fairly familiar with the Illustrator software, I wanted to make a sticker using features that either I haven’t used before or am still getting to know. While thinking of the design, I came across my Bauhaus inspired InDesign postcard and thought to bring some of those elements over into this sticker, mainly the angular and abstract shapes as well as the colours being loosely based off the primary colours. I created and outlined the text, as well as making a division in the word ‘TYPE’ to make some visual interest (SC 1). Then I used the effects window, went to 3D and selected Extrude & Bevel; I chose ‘Isometric Top’ to make the text look as though it was facing up (SC 2). To create the effect of depth and lighting, I selected the relevant areas and used the gradient tool to add shading onto the outer edges of the letters and darker colours to the inner gaps (SC 3-4), then to accentuate the letters and add more dimension, I used the pen tool to add white highlights (SC 5-6). Finally, to tie the whole design together as a sticker, I worked on choosing a shape to have as the main base of the sticker and act as its main outline. After experimenting with different shapes, I settled on an ellipse as it creates an even overall shape and plays into the perspective of the type without looking uneven, unlike squares or other polygons. For the background colour I chose a mid yellow to orange, as it compliments both the purple and the blue used.

As I have previous experience with Illustrator, I was able to proficiently use basic features such as the pen tool and pathfinder tool. However I thought that just using what I already knew would not help me develop my skills, thus negating the aim of this project and module.

For the first two stickers, I knew that I could have just drawn outlines I wanted with the pen tool, but this would have taken a very long time and start a long, never ending mission of accurately trying to adjust every curve and line as we were shown in Integrated Design Methods. This encouraged me to look for a way to create outlines without having to draw them myself. A quick search on Youtube lead me to this tutorial which taught me about the ‘Offset Path’ feature; which creates an outline with a specified offset, meaning that it can be as far away or as close as you’d like. Once the outline is created, it acts as a normal stroke, which allows you to alter the stroke weight or switch it to a fill if desired. I used it both ways, however I’d like to experiment with it more to see what kinds of artwork I can create with it, and if different effects could be applied over it to make it even more visually appealing.

For the third sticker design, I wanted some more guidance on the effects panel and the different things it had to offer. While searching for tutorials, this one caught my eye, so I decided to use the basic premise of the effect and add my own flair to make the sticker more original and fit into the aesthetic I wanted. Once the chosen text as outlined, I used the extrude and bevel effect and set it to isometric top. However unlike the tutorial, I used only one layer to make the text look more solid as opposed to the different coloured layers in the tutorial. I have attempted to make an effect like this during my A-Level projects, but I had always used the blending options, and it never occurred to me to use the 3D effects. Creating the gradients and stars were already skills that I knew, but using them again helped me to develop and practice them.

My inspiration for the stickers was taken from these three sets of stickers I found while scrolling through Behance. The first picture shows a similar merged letter effect that I aimed to achieve in the first sticker, the second shows the repeated outline I used in the second sticker, and the third picture shows the 3D/isometric view of text that I applied in the third sticker. These pictures all caught my eye because while they’re all distinctly different, there’s an element of fun to them that I wanted to try and capture in my own designs. I also decided to use these as inspiration because they all included features that I had never tried to recreate on my own, which allowed me to develop my skills closer to a professional standard as demonstrated by the pictures above. In the future I would like to explore each of the concepts I created around my stickers further and possibly develop them into unique branding ideas and aesthetics.

By doing this task I have improved my general knowledge of the program and have used more complex effects. I have also learned that there is more than one way of doing something, and some ways produce different results. I feel that I need to improve my efficiency in using the program by learning more keyboard shortcuts past the realm of basic ones like the selection arrows and the pen tools. Though it may seem abstract, I would also like to improve on the way I view my own work, because at times I find myself being caught up in details that don’t end up being necessary, and trying to overcomplicate designs to make them look more complex when they don’t need to be.

Overall I really enjoyed this task as it had a lot of creative freedom, which allowed me to freely experiment with different styles. Even though I have used Illustrator before, I never looked further into the different features available, however this task let me do that and create designs I am happy with, as well as develop new skills to be used in the future.