Background
Sgt. Lee Tomas, Chief of the RAF’s air staff campaign set out to create striking visuals that broke conformity of the old and invigorated the new to build a Next Generation Air Force. The purpose of this was to create designs that brought a new lease of life to the RAF and encourage recruitment. Lee’s desire was therefore translated through Project Lateral to refresh the organisation and engage with new audiences, whilst maintaining the RAF’s values. Lee reached out to the department to help shape this campaign and craft an image that was precise and professional, looking to eradicate pointless programmes and the overused conservative style.

The brief
For this project there was a set of multiple deliverables to produce, this therefore determined that a mini brief for each deliverable was required. The core deliverables and respective briefs are as followed:

To create a badge to be used on the rocket launch in 2021 and combine the Astra logo and colour palette with client supplied reference image. This will create one design which will be used at the Astra Space Rocket Launch.

To digitise 3 comic illustrations based off the client’s provided sketches that matches the house style of the client and client provided colour scheme.

To create a logo to represent the new AviatoRAF programme and rebrand the RAF ‘Airman’ to the RAF ‘Aviator’. Use client provided sketches for reference or inspiration, incorporating the tagline ‘fresh af’ into the logo.

Secondary deliverables were also proposed; however, this was subject to time and success of the primary deliverables. Each deliverable was a stark different style to previous graphic material produced by the RAF, therefore designs had to be carefully crafted and considered.

Within our brief we established our roles and responsibility as a team and as individuals, also creating a service level agreement to work with to ensure the project ran smoothly.

Research
Most research was collected through our first online meeting with the client. From this, we found that the RAF were trying to rebrand their image to appeal to a younger audience. The RAF is the UKs aerial warfare force, supporting the objectives of the British Ministry of Defence. The new concept for ‘RAF ASTRA’, is to create a fresh new image, to replace the RAFs overused conservative style. The attitude of the RAF members is that of never losing, even in failure you can learn. We will therefore try and communicate this through the new visual design. The audience for the RAF ASTRA ranges from 16 to 60. This means that the visual designs that we create for this campaign, must be fun enough to appeal to a younger, new audience, while also being accepted by older existing members of the RAF.

Design process and deliverables
As a team we began ideation by sketching down ideas, themes and potential routes for the deliverables to meet their mini briefs. In turn this process acted as an action of filtration, whereby we eliminated unnecessary components or ideas and started to create a strong concept for each deliverable. 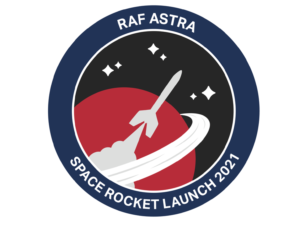 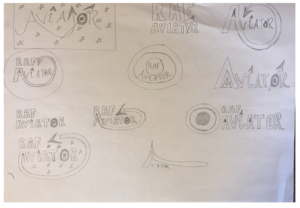 Upon suggestions from the client, we also implemented our own preferences and style into the designs, attempting to create a fresh new brand as the client had suggested. Within these sketches, we focused on a typographic logo to enforce the ‘Aviator’ name. We also explored the use of the target icon, which was important for maintaining the brand identity.

Upon feedback from our project supervisor, it was suggested we take the designs digital in order to fully explore the use of colour and scale at different sizes. Digital illustrations allowed us to fully engage with the colour palette we had been provided with and further enforce the RAF aesthetic. This helped us to make informed decisions on which designs were most effective and choose which to show the client. We selected our most favourable designs in order to receive feedback from our supervisor before showing the client. 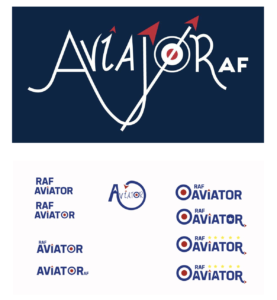 Subsequent to this meeting, we collated the best designs ready to show the client. We settled on 3 designs, taking inspiration from the content they provided and maintaining the classic RAF colour scheme. We then received feedback from the client, in which it was confirmed that they were happy with the designs and agreed to select their favourite. 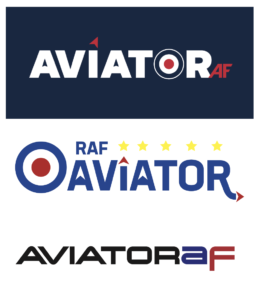 Reflection
The nature of this project was different to how we expected, since we were required to work as the client’s design team. Subsequently, there was a variety of different deliverables that the client expected us to complete throughout the project. The flexibility of these deliverables meant that we were able to apply our skills to a range of different design work. However, it was often frustrating to learn that many of our designs were no longer needed or going to be used and therefore put a halt to the progress of current work. Furthermore, we were often sent a range of deliverables at a single time which became quite overwhelming when balancing each of the tasks. The most difficult part of this job was communicating with the client. We took value in learning what it would be like to communicate with a client in a working environment, however, we found that the client would take a long time to respond to our emails and often not respond at all. It was difficult to keep track of deliverables since the clients preferred method of contact was via mobile, which was often at non-working hours. Despite this, we gained value from experiencing what it would be like to work in a demanding working environment.

Ourselves and the client were pleased with the outcomes we produced; however, we feel that with greater organisation and communication between ourselves and the client, we could have produced a greater sample of work. Despite this, working as a design team was a unique experience and we are proud to have worked with the RAF and help contribute towards their branding.