The first step of this whole task was to find an appropriate background or pattern that I thought would look appealing to add the rest of the designs in. This would be with this pattern that I found on google, the colours match Yaa Gyasi’s pallet for her book. 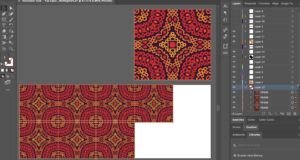 The second step of this task was then getting an impactful image to make the design more relative to the brief. This is why I use a Silhouette of Yaa Gyasi herself. I then used the pen tool to outline her head and neck shape. 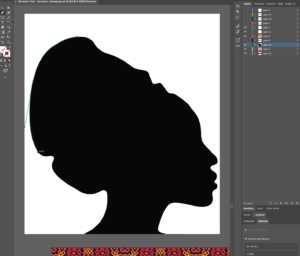 The fourth step of this task was then to include some colour to this silhouette, in my case I wanted to include the same colour palette as the book cover. This is why I have included the exact same blue and the same reds as the cover. I did this by using the eyedropper tool, which was very useful they are very different reds and navy blues. After this, I then used the silhouette as a basis for the main component as the design for this vector task. I also flipped the colours on two of them as you can below, with the red filled and outlined silhouettes above the blue silhouettes. 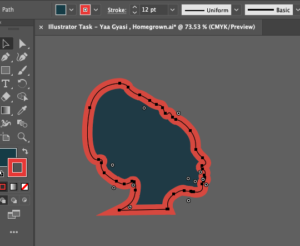 Software tutorials and Sources of inspiration

This was the section of this week’s tasks that I did enjoy a lot, due to the fact that there was such a range of material that was out there to find and learn. I do know that there were a couple of software tutroials that I did like which were useful enough to get me started with what I wanted to achieve when I was in the process of thinking of ideas and simple design plans for this vector advert. The first tutorial that I wanted to mention is ( https://www.youtube.com/watch?v=hNjxcvvP1Mo ).

This YouTube video did help me with learning how to use the pen tool with letters,  it showed the letter A and the letter S. I then learned how to do it right and curved lines to trace around images or letters in this case.  The tutorials that were given to us in the brief were quite useful as well in terms of getting an idea of what types of work I could create using these tools in Illustrator. This link did give me some idea of the basics as well of using this tool.
( https://helpx.adobe.com/uk/illustrator/how-to/drawing-tools-basics.html ).

The next source for tutorials for me when I was in the process of thinking about where to look for steps in creating certain designs. I went on YouTube again, due to the reliability of the videos. They didn’t give any false information and made everything very clear. If something wasn’t apparent when I was doing something they did explain it. which is what made the experience of trying out these new tools and processes even more enjoyable and peaceful. The video that I used that was amazing for me was
( https://www.youtube.com/watch?v=jxcCLan0Yko ).

The main task for this practice was to produce an illustration for a social media banner for a podcast by Yaa Gyasi. The book is called ‘Homegoing’, I did really see this book cover and other art similar to it as very true to itself and more so in tune with the heritage of African people. There were very different shapes, angles and colours behind every layer which did help me with deciding what type of background pattern I was going to end up using, In the end, I did end up using something very similar in terms of colour pattern to the book cover.

I do think that the best source of inspiration was from looking at videos and also looking on Pinterest as well. I used Pinterest to ensure that I could get the most out of people who have already made certain Yaa Gyasi designs already.  With Pinterest I did find a few pictures and posts that people decided to put up, that did seem to look like what I had in mind with designing my own advert design. This helped me with knowing what to design quite inspirational. ( https://www.pinterest.co.uk/search/pins/?q=homegoing%20yaa%20gyasi%20designs&rs=typed&term_meta[]=homegoing%7Ctyped&term_meta[]=yaa%7Ctyped&term_meta[]=gyasi%7Ctyped&term_meta[]=designs%7Ctyped )

The next piece of inspiration that I did find very helpful was a video that I came across when I was looking through YouTube. This video looked at what African heritage looks like and gave a few designs within illustrator. This video showed me what type of colours , patterns , styles and whuch colours compliment one another. Instead of me looking for a set of designs that looked like the ‘Homegoing’ book I wanted to expand my knowledge on certain patterns and also specific meanings. In my case I was looking for a set of familiar designs that I could have gone off of, at the end of my decision-making process of what background, for example, I was going to use. Was quite simple as I learned that watching these videos and looking at posts on Pinterest that these designs are all patterns and the patterns follow a set way of starting and ending.(  https://www.youtube.com/watch?v=GIUHtb14ZhY )

This is why I did go ahead and pick this image. This image or pattern was then duplicated in y final design because, in essence, it could. It was perfect for what I needed to create, in terms of making a simplistic and vibrant pattern. This image was the focal point of the foundation for building up my design from the ground up, starting off with a simple silhouette. 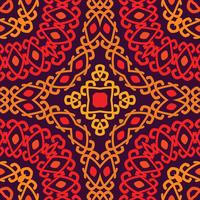 This image was the focal point of the foundation for building up my design from the ground up, starting off with a simple silhouette.