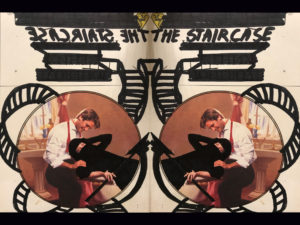 On Monday, we have been assigned to create a book cover that will narrate the story of the book. I have chosen the “Staircase” as my theme for the book cover.It was a story about a man who was barely sick and placed at the 7th floor, however as the time passes by he is moved to the ground level. Even though he wasn’t very ill, he ends up being on the ground floor and therefore, in the grave.

As, the story began at the top floor of the  hospital, and I drew a staircase that started from the title of the book (upper floor) and ended with a photo of a man hugging Death (last floor-grave).The idea behind the picture is , man led himself into the death. I drew a black mantle and a scythe over the   woman to represent her as a death. I  used a black marker to make an illustration of  the staircase and Death, as it looked more dramatic.