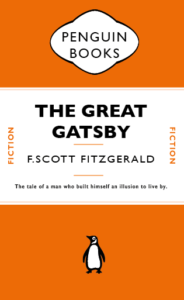 In James’ lesson we followed a tutorial on how to recreate a penguin book cover. I used in design to create both of these covers, in the lesson i learned how to use some of in designs tools as the program is new to me. I learned how to group shapes together and how to manipulate parts of type such as the kerning and the height. In my version of the book cover i choose to represent the movie/ book ‘The Shining’ by Stephen King, i followed the same tutorial and layout we had used in class for the new design. I featured some of the films well known quotes such as ‘Here’s Johnny’ ‘Redrum’ and ‘all work and no play makes jack a dull boy’. I changed the opacity of ‘Redrum’ to 21% so it would be easier to see the title and author of the book, i also gave the penguin an axe as it was an iconic item in the film. I also learned how to change the direction of text as well as make certain objects different colours. 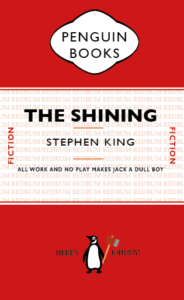